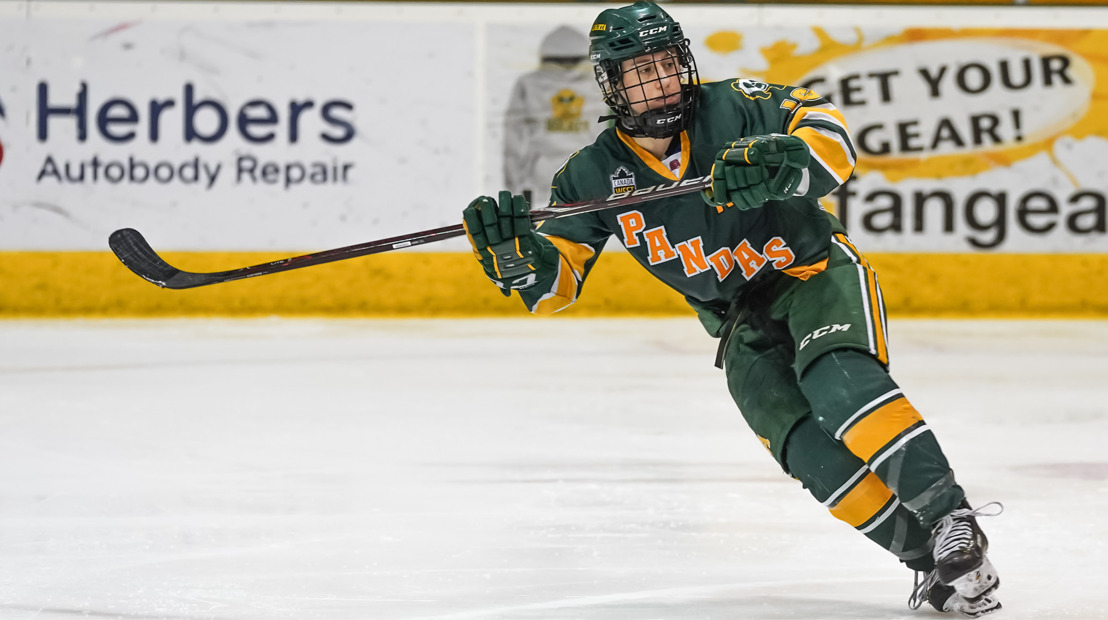 EDMONTON – Alex Poznikoff has been named the 2018-19 Canada West Women’s Hockey Player of the Year, as announced Wednesday by the conference.

The fourth-year Alberta Panda takes home the conference’s highest honour after leading both CW and U SPORTS in scoring with 37 points (15G-22A) this season, helping Alberta to first-place in the conference.

Joining the trio of players as an award winner was Alberta bench boss Howie Draper, who takes home his sixth CW Coach of the Year award.

Draper and company are set to host the best-of-three CW Final this weekend in Edmonton, where the Manitoba Bisons will be looking to defend their conference title from a year ago.

You can watch the entire series, which opens Friday, by tuning into Canada West TV.

PLAYER OF THE YEAR: Alex Poznikoff

Alex Poznikoff is the conference's Player of the Year, after helping lead the Alberta Pandas to a first-place finish in the regular season.

Poznikoff registered 37 points this season for Alberta, narrowly edging out teammate Autumn MacDougall for the conference scoring lead, as the pair were two-thirds of the nation's most prolific scoring line along with Kennedy Ganser.

Both Poznikoff's 15 goals and 22 assists were the best in the conference, as the Kinesiology, Sport, and Recreation student topped the nation in points.

The honour is just the latest on a long list of accomplishments for the Edmonton, Alta. product, who was named a CW first team all-star last week for the third consecutive time in her career. Poznikoff was also a conference all-rookie during the 2015-16 campaign.

“Alex is the linchpin of the Pandas hockey team right now, and has been integral to the success that we've experienced as a team this season. She contributes to all aspects of our program, as a strong student-athlete and person that we can all model ourselves after. She pushes herself to greater heights every day in everything that she does, and challenges her teammates and coaches to do the same.” – Alberta Head Coach Howie Draper.

ROOKIE OF THE YEAR: Breanne Trotter

The future is bright for the Mount Royal Cougars, thanks in large part to forward Breanne Trotter, who is the CW Rookie of the Year.

A product of the Rocky Mountain Raiders program, Trotter translated her scoring touch at the midget level to CW this season, registering 20 points (9G-11A) in 28 games for MRU after finishing her midget career with a 34-point campaign.

"We felt coming into the season that Breanne would have the ability to impact our team and our conference. The numbers she was able to put up as a first-year speaks to her ability and commitment to be her best every day. Breanne has certainly helped set a new standard within our program." - Mount Royal Head Coach Scott Rivett.

Third-year forward Anna Purschke is the Student-Athlete Community Service Award winner after volunteering more than 100 hours this season in the Calgary community.

The Sherwood Park, Alta. product spent significant time this season working with the Hockey Education Reaching Out Society (HEROS). The organization is a volunteer-driven charity that uses the game of hockey to teach life-skills and empower marginalized youth in some of Calgary’s most vulnerable communities.

Academically, the Business student earned a 3.75 GPA during the fall semester, and was an Academic All-Canadian during the 2017-18 season.

On the ice, Purschke was an assistant captain for the Cougars, recording six goals and three assists in 19 regular season games.

"Anna exemplifies what a student-athlete is all about. She cares about her education and works extremely hard to manage the load of both her academics and hockey. Anna also understands what it means to give back and contribute to something bigger than just her school and team. She has taken it upon herself to give back to a variety of great causes and is a role model for our entire program." - Mount Royal Head Coach Scott Rivett.

COACH OF THE YEAR: Howie Draper

More than two decades into his coaching career and Howie Draper continues to thrive with the Alberta Pandas.

The longtime coach of the Pandas is the CW Coach of the Year for a sixth time in his career, after guiding Alberta to a 23-win season and first in the conference standings. Draper was previously named the conference's top coach in 2000, 2002, 2003, 2004, and 2011.

The award is the latest honour for Draper, who's enjoyed a banner season. The former Golden Bear defenceman guided Team Canada to a gold medal performance at the IIHF Women's U-18 Championship earlier this year, when Canada downed the United States 3-2 in overtime to claim gold.

“What Howie has done with the Pandas hockey program is truly remarkable. The conference has improved tremendously over the past 20 years, and the fact Howie is still winning coaching awards shows the kind of impact he has had on this team. His lasting legacy with the Pandas will be off the ice, as he has helped countless young women become leaders and role models in the community.”  - University of Alberta Athletic Director Ian Reade.