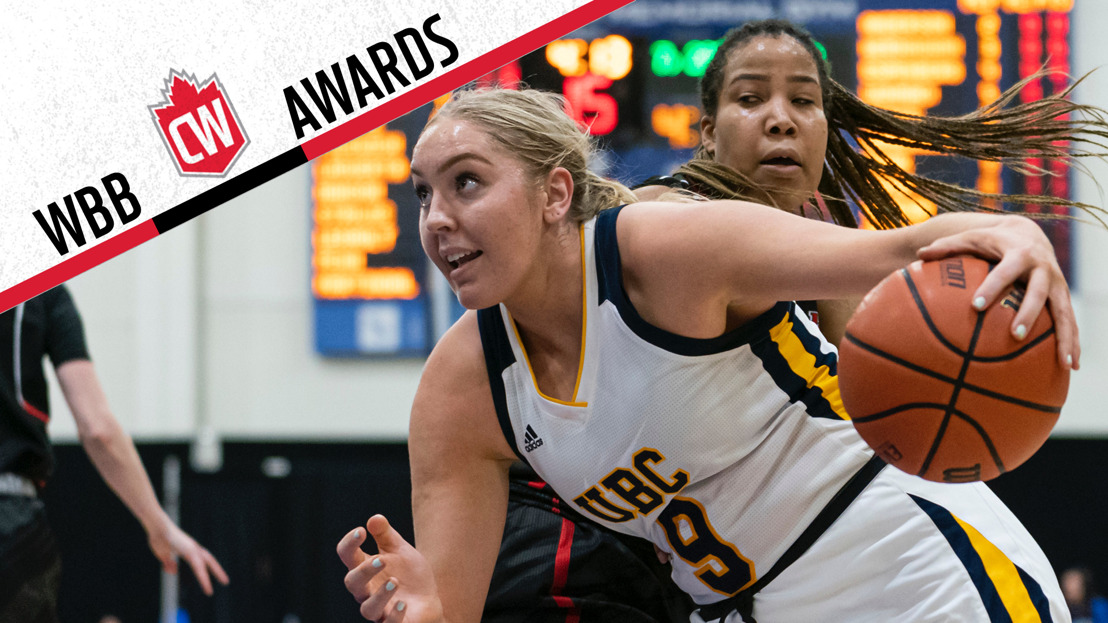 EDMONTON – UBC's Keylyn Filewich is the Canada West Women's Basketball Player of the Year after an outstanding season at both ends of the court.

In terms of first-year players, no one was better than Deanna Tuchscherer, who started all 20 regular season games for UFV, while recording 15.4 points per game. That total was good for 10th overall in the conference and helped earn the Cascade the CW Rookie of the Year award.

Defensively, fifth-year Lethbridge Pronghorn Katie Keith is the conference's top defender. Keith recorded 47 steals this season, which was good for fourth in the conference, and her 139 defensive rebounds were second in CW.

Being honoured for excellence on and off the court is Saskatchewan's Megan Ahlstrom, who takes home the Student-Athlete Community Service award. The fifth-year is a four-time Academic All-Canadian, volunteers in both her hometown of Calgary and Saskatoon, and has been a key part of the most successful stretch in Huskies program history.

In terms of inspiration, Manitoba's Addison Martin has provided plenty during her time with the Bisons. The fourth-year forward is the winner of the Courage Overcoming Adversity award, as she's persevered through two torn ACLs, and the loss of her mother, which led to her balancing a job with both her studies and basketball career.

Rounding out the award winners is Alberta's Scott Edwards, who is earns the Coach of the Year award for the third time in his career. Edwards led the Pandas to a 16-4 record this season.

Edwards and the Pandas will be in Saskatoon this weekend, as they'll take on Saskatchewan in the CW Women's Basketball Championship on Friday, February 28. The game is set for 7 p.m. CST and can be seen live on Canada West TV Presented by Co-op.

All CW award winners now move forward as the nominees for the U SPORTS awards, which will be handed out next week in Ottawa.

UBC Thunderbird Keylyn Filewich did it all this season as one of the most complete players in the nation.

The fourth-year forward has been rewarded for her consistency at both ends of the floor with the conference's Player of the Year honour.

Filewich led the conference in blocks (28) and field goal percentage (59.1) this season, while finishing inside the top five in several other key statistical categories, including: points per game (19.1 - 4th), offensive rebounds (74 - 3rd), and defensive rebounds (133 - 4th).

Her all-around game was pivotal to UBC's success, as the Thunderbirds went 16-4.

“Keylyn's had a very consistent career and every year she’s added new dimensions to her game. She’s a leader for us on and off the floor and we rely on her veteran presence and consistency. This year she’s brought even more consistency and leadership to the group. To be on the leaderboard for points, rebounds, and shooting percentage just speaks to her consistency and level of play. The exciting part about Keylyn is I know there’s another level we can get to and I’m looking forward to that for her fifth and final year.” – UBC Head Coach Deb Huband.

The lone rookie to earn a CW all-star nod this season, Fraser Valley's Deanna Tuchscherer is the conference's Rookie of the Year.

Tuchscherer started all 20 regular season games for UFV, playing nearly 30 minutes per game for the Cascades. Her 15.4 points per game was good for 10th in the conference, and was second on the team to only perennial all-star Taylor Claggett.

A native of Chilliwack, B.C., Tuchscherer becomes the first UFV women's basketball player to earn the CW Rookie of the Year award.

“I’m just really happy for Deanna and the season that she’s had. She’s had a really good transition to the university level. Particularly at the offensive end of the floor, she’s been able to score in a variety of different ways. As the season’s gone on, she’s been able to facilitate for her teammates, and I think her defence has dramatically improved as the year’s gone on. She’s had a really impactful first year, and I’m happy that she’s been recognized for the contributions she’s made to our team success.” – Fraser Valley Head Coach Al Tuchscherer.

Veteran guard Katie Keith has been acknowledged as the conference's top defender, finishing her career with a significant piece of CW hardware.

Keith's energy on defence didn't come at the expense of playing time, as she started all 20 regular season contests, playing more than 30 minutes per game.

"Katie separates herself from others on the defensive end through her relentless effort and versatility to guard multiple positions. Katie was asked to guard the opponent's best player every week, regardless of skill set, size or strengths and excelled at this challenge consistently. Her selfless dedication and her consistent work ethic grew her game into one of the elite rebounders and team defenders in the league, as well as an indispensable piece of our program. Katie is very deserving of this honour." – Lethbridge Head Coach Dave Waknuk.

Standout Megan Ahlstrom does it all for the Saskatchewan Huskies and has been named the CW Student-Athlete Community Service award winner.

The fifth-year guard has been a key piece for the defending Canada West champions throughout her career, all while making an impact in the community, and being an outstanding student.

Already a four-time Academic All-Canadian, Ahlstrom is well on her way to earning the honour a fifth consecutive time with a current average of 93.5 per cent in kinesiology.

In the community – both in Saskatoon and her hometown of Calgary – Ahlstrom has been involved with numerous organizations, including: Autism Aspergers Friendship Society of Calgary, Huskie Athletic Council, and volunteering at Hugh Cairns Elementary School.

"It's no coincidence that Megan has been a key part of the most successful five-year span our team has ever had. She has been one of our team captains for the past three years, and consistently leads our team in minutes played, due to her grit and toughness at both ends of the floor. Megan is an exceptional individual. She excels at everything she takes on, and has a work ethic that is remarkable to witness. She is the type of person who puts others before herself and because of this, has been an excellent leader and role model in the community and on our team." – Saskatchewan Head Coach Lisa Thomaidis.

Manitoba's Addison Martin is the winner of the CW Courage Overcoming Adversity award after showing her commitment to the game of basketball while persevering with grace through loss and challenge.

In the summer of 2016, Martin suffered the second torn ACL of her career after previously tearing her other ACL during her Grade 11 season. Spending the entire 2016-17 season rehabbing from her injury, Martin has worked tirelessly to return and compete at the highest level. This season, the Winnipeg native averaged 11.6 points per game, while posting 7.8 rebounds per game.

Away from basketball, Martin has worked even harder for her family. Following the passing of her mother in early 2017, Martin and her twin sister were forced to find a new home for themselves and their younger brother. Since then, Martin has balanced her studies, sport, and family with a job to ensure her and her family are taken care of.

Her ability to balance a busy schedule and ensure the best for her family has proven to be an inspiration.

"I’m so proud of Addison. She has been handed some extremely hard situations in the last four years but she has managed to stay positive, to be a support to so many others & continues to strive for improvement everyday. On top of the big picture she has managed to improve every year with us on the basketball court. She had her best statistical year in scoring, rebounding, & steals and we are happy she is getting recognized for her hard work."  – Manitoba Head Coach Michelle Sung.

For the third time in his career, Scott Edwards has been named the CW Coach of the Year. Edwards adds the award to his previous wins from 2006-07 and 2013-14.

The longtime Alberta Pandas coach led his team to a 16-4 record, stretching his all-time CW regular season record to 220-74 (.748). Over his tenure with Alberta, Edwards has never posted a losing record and reached the 15-win plateau a total of 10 times.

He is now looking for a second national coach of the year award, after previously claiming the honour during Alberta's CIS second-place finish during the 2006-07 season.

“Despite losing one of their best players during the pre-season, Scott has once again guided the Pandas on another incredible run this season. Scott has always done a great job at raising the level of his talented student-athletes, and this season is no different. Leading the team to an impressive 16-4 record and a first round playoff bye is hopefully the start of a long playoff run for this team. ” – Alberta Athletic Director Ian Reade.