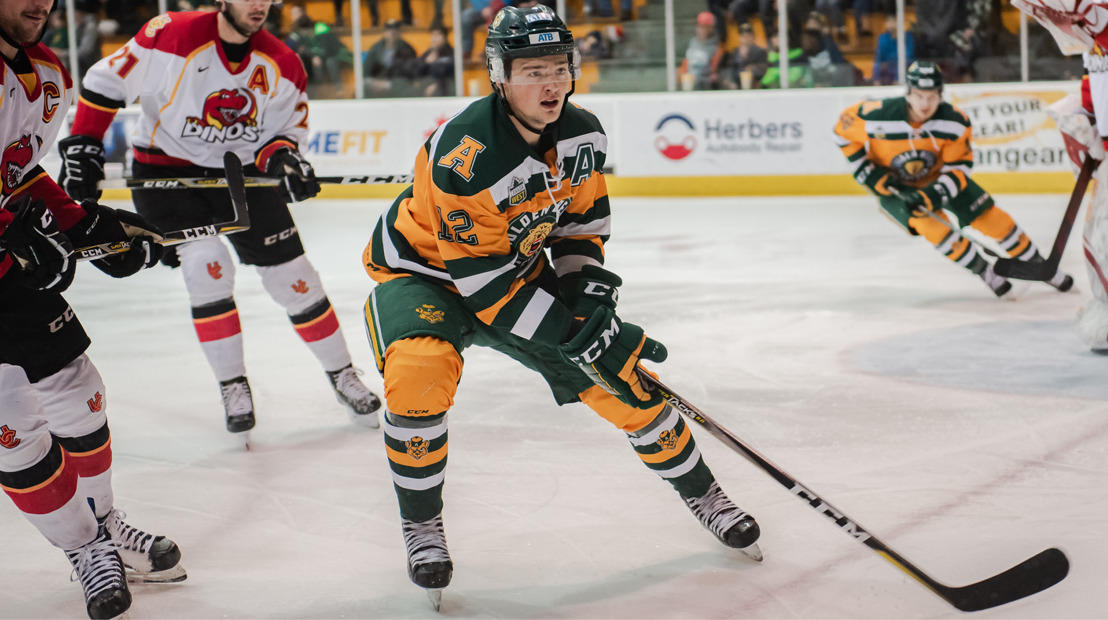 The awards, which were selected by the conference’s eight men’s hockey coaches, come ahead of Friday's CW Final opener between the Saskatchewan Huskies and Alberta Golden Bears in Saskatoon.

You can watch this weekend’s best-of-three CW Final by tuning into Canada West TV.

Also winning major awards were Saskatchewan Huskies Taran Kozun (Goaltender of the Year), and Dave Adolph (Coach of the Year).

Kozun teamed up with Travis Child to claim the Adam Kryczka Memorial Trophy, which goes to the team with the lowest goals against average. Saskatchewan’s goalies combined for a 1.73 GAA.

PLAYER OF THE YEAR: Luke Philp

Alberta Golden Bear Luke Philp, who has been generating some buzz this season in pro scouting circles, is once again the Canada West Player of the Year.

For a second consecutive season, the Alberta forward led Canada West in scoring, earning the Dave “Sweeney” Schriner Trophy as the conference's leading scorer. This season, Philp registered 45 (21G-24A) points after his 40-point (11G-29A) campaign in 2017-18. He is the first CW player since former Bear Chad Klassen in 2010-11 to post consecutive 40-point seasons.

Philp's impressive totals came in 24 games, after missing a four-game stretch early in the season with an injury.

Of Philp's 45 points, 25 came even strength, 17 on the power play, and three while short handed. Through 78 Canada West regular season games, Philp has 103 points (42G-61A) for Alberta, who is looking to defend their CW and U SPORTS championships in the coming weeks.

A product of Canmore, Alta., Philp had 14 multi-point games this season for the Bears, who finished second in the conference standings. One of the most impressive stats from Philp's outstanding season was the fact he was held off the scoresheet just three times, and finished tops in the conference in plus/minus amongst forwards with a +21 rating.

Philp now moves ahead as the CW nominee for the Sullivan Trophy, which is awarded to the nation's top university hockey player, and will be handed out in Lethbridge prior to the University Cup next month.

"Winning the Canada West scoring title two years in a row, especially this year when he missed four games due to injury and still scored 21 goals, speaks for itself. Luke is an excellent leader on our team and a clutch performer. He has produced in all situations, and been the most reliable and consistent player in the conference this season.” - Alberta Head Coach Ian Herbers.

Fram won the honour last season after finishing third in conference scoring among defenceman with 23 points in 28 games (9G–14A). He followed up that campaign with an even better one this season, posting 30 points (9G-21A) in 28 games to lead all conference defenders.

He is the first CW defenceman to record a 30-point season since 2013-14, when Calgary's Giffen Nyren and Alberta's Jordan Rowley both recorded 30 points.

"There's little doubt in anyone’s mind that Jason is the best offensive defenceman in the conference. What has impressed me the most this year, is how much better he is getting at the defensive part of his game. He is continually improving his gap, which has allowed him to break up the play before it happens." - Alberta Head Coach Ian Herbers.

GOALTENDER OF THE YEAR: Taran Kozun

It was a year to remember for Taran Kozun, as the Saskatchewan Huskies netminder is the conference's Goaltender of the Year, following in the footsteps of former teammate Jordon Cooke.

Kozun was stellar from start to finish after replacing Cooke – who won three consecutive CW Goalie of the Year awards before turning pro this season – as the Huskies' top goalie this season.

The former Seattle Thunderbird tied Alberta's Zach Sawchenko for the best save percentage in the conference at .926. The pair also set a new conference record for shutouts in a single season, both registering five perfect nights.

Kozun, however, earned the edge in the record books when it came to wins in a single season, as he became the first CW goaltender ever to win 20 games.

“Congratulations to Taran. He's a highly-skilled goaltender and more importantly an even better teammate. He is very deserving of this award.” - Saskatchewan Head Coach Dave Adolph.

ROOKIE OF THE YEAR (U of A Hockey Alumni Trophy): Grayson Pawlenchuk

Rookie forward Grayson Pawlenchuk made his impact felt on the high-powered Golden Bears this season, as the former Red Deer Rebel is the CW Rookie of the Year.

An Edmonton product, Pawlenchuk was tops in rookie goal scoring, with 13 markers. That total was tied for the fourth highest overall in the conference.

Before joining the Bears, Pawlenchuk played five full seasons in the WHL, all of them with the Rebels, as he registered 144 points in 282 career WHL regular season games.

"Grayson was captain of the Red Deer Rebels of the WHL last year, and after just a month with the Bears, we didn't have to ask why. He's a guy who gives 100 per cent in practice and games, he is well respected by his teammates, and he has earned the opportunity to play in all situations this year, as a first-year player.  We're very glad he chose the University of Alberta to continue his career." - Alberta Head Coach Ian Herbers.

Rankin has been a consistent contributor for the Cougars since joining the team midway through the 2015-16 season after a stint in the ECHL. Through 79 career CW regular season games, the former Calgary Hitmen has 72 points and just 24 penalty minutes.

This season, he tallied 15 points (7G-8A) in 22 games, while registering just four penalty minutes for MRU.

"We are excited for Connor to receive the CW Sportsmanship and Ability Award. He's a very deserving recipient as he takes great pride in being a student-athlete, representing MRU and playing Canada West hockey. He's respected around the league for the class and professionalism that he brings to the ice as one of the top forwards in the conference.  Cougars Hockey is very proud of Connor's achievements on the ice and in the classroom as he continues his journey towards earning a degree and another opportunity in professional hockey." - Mount Royal Head Coach Bert Gilling.

Alberta Golden Bears captain Riley Kieser has proven to epitomize what it means to be a student-athlete over his five seasons at the Canada West level.

A Memorial Cup champion with the Edmonton Oil Kings prior to joining the Bears, Kieser now has two University Cup titles to his name and three CW titles.

In the community, Kieser has been involved with the Edmonton and Capital Region Chapter of the Multiple Sclerosis Society of Canada as his father, Chris, has multiple sclerosis. In the summer of 2018, he served as co-captain for the United Sport & Cycle team which raised $81,000 in the MS Bike Tour, a two-day ride from Edmonton to Camrose and back, covering 90 km per day.

Kieser is also on the University of Alberta Athletic Board (UAB), and has been involved in the UAB BEAR HUGS program, which sees members of the Golden Bears and Pandas teams visit the Stollery Children’s Hospital.

“Riley is a great leader. He leads by example every practice and every game through his relentless work ethic. Even though he is one of the best defensive players and penalty killers in the conference, he has also created offensive opportunities through his hard work and has been rewarded, as he finished top 12 in conference scoring this season." - Alberta Head Coach Ian Herbers.

COACH OF THE YEAR: Dave Adolph

For the fourth time in his career, Saskatchewan Huskies head coach Dave Adolph is the CW Coach of the Year.

Adolph guided the Huskies to a 25-3-0 record and first-place finish in the CW standings, as his team finished as the top regular season team in the conference for the third time in the last four seasons.

The longtime Huskies bench boss, who got his start coaching at the CW level back in 1989 at the University of Lethbridge, previously won the the conference Coach of the Year award in 1998, 2000, and 2017.

In 2017 he was also named as the nation's top university men's hockey coach, winning the Father George Kehoe Memorial Award.

"It's always excellent when our coaches are recognized for their efforts. This is an extremely well-deserved award for the team’s tremendous season.” - University of Saskatchewan Chief Athletics Officer Shawn Burt.