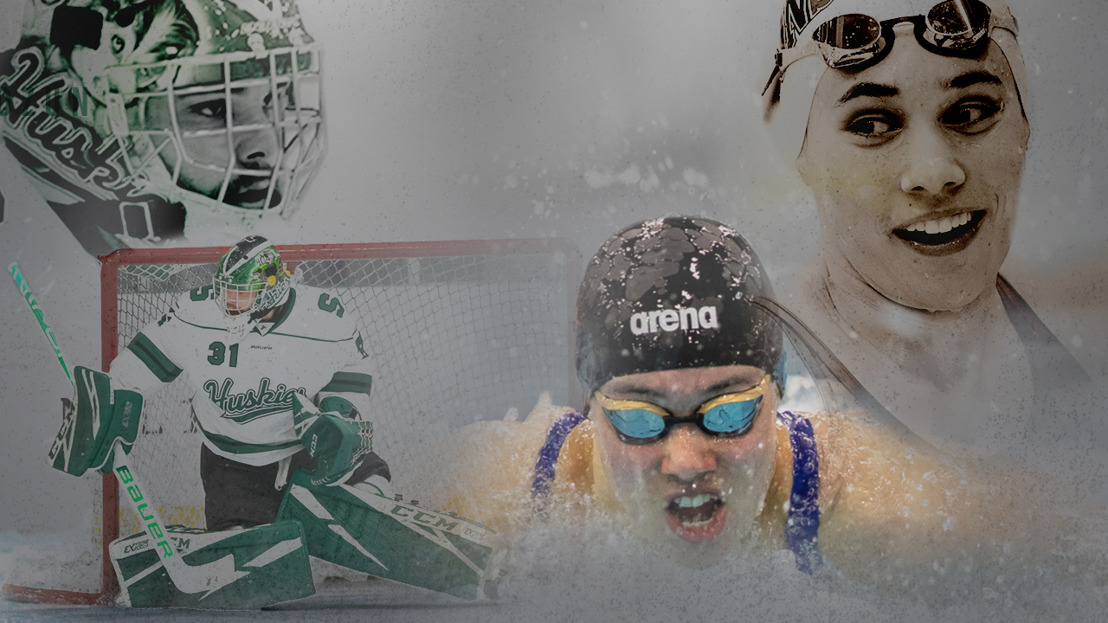 EDMONTON – The best of Canada West were announced Thursday morning, as the University of Saskatchewan's Taran Kozun and University of Manitoba's Kelsey Wog were named the 2019-20 CW Athletes of the Year.

Kozun and Wog were selected for the conference's top individual honours by Canada West's 17 members after stellar seasons on the ice and in the pool respectively, as both continued to cement their places as some of the best student-athletes in school history.

The pair will now move forward as the Canada West nominees for the prestigious Lieutenant Governor Athletic Awards, which honour the nation's top male and female student-athletes. Those awards will be announced by U SPORTS on June 25th.

Kozun's CW Male Athlete of the Year win adds to what has been a remarkable season of individual accomplishments for the former Seattle Thunderbird.

The third-year netminder was dominant between the pipes for the Canada West champion Saskatchewan Huskies. The WHL's top goaltender in 2014-15 , Kozun led the conference in every key goaltending statistic this season, posting a 1.87 goals-against average, .931 save percentage, five shutouts, and 17 wins.

As if those numbers weren't enough, Kozun also became just the second goalie in CW history to score when he found the net in January against the Calgary Dinos.

Canada West coaches acknowledged Kozun's standout season, naming him both the CW Player of the Year and Goaltender of the Year. He would go onto become the Senator Joseph A. Sullivan Trophy winner as U SPORTS' top player, joining Jon Barkman (2001-02) as the lone Huskies to have captured the nation's top award.

By the time Kelsey Wog's record-setting career at the University of Manitoba is complete, the hometown product's athletic résumé will undoubtedly go down as one of the greatest in school history.

Thanks to her stellar national championship, Wog was named the U SPORTS Female Swimmer of the Year, following four-time winner and Canadian Olympian Kylie Masse.

Speaking of the Olympics, those are a likely next step for Wog, who had her sights squarely set on the Canadian Olympic Trials prior to their cancellation due to the ongoing COVID-19 pandemic. Heading into 2021, her sights remain set on qualifying for the Tokyo Olympics, which are now scheduled for July of next year.

Prior to dominating at nationals in February, Wog earned four gold medals and a relay bronze at the CW Championships in November of last year, with two of her golds coming in CW record times.

Wog is the first CW Female Athlete of the Year in Manitoba history. She will be looking to join Terri-Lee Johannesson (basketball) as a national winner, after Johannesson was named the top female student-athlete in 1996-97 out of the Great Plains Athletic Conference.