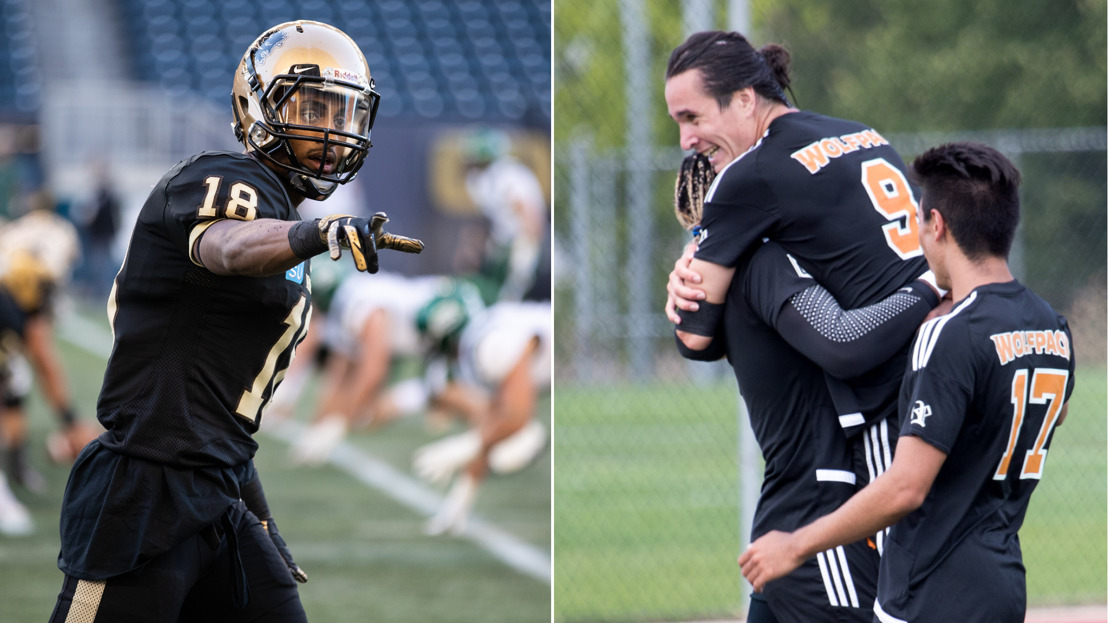 EDMONTON – The first Canada West Football Players of the Week, along with the first Men's Three Stars of 2019 were announced Tuesday.

Bockru and Dufault combined on the offensive and defensive sides of the ball to lead Manitoba to a convincing 43-19 Week 1 win over the Saskatchewan Huskies.

Meanwhile on the pitch, Fraser recorded four goals over the weekend for TRU. His hat trick on Sunday lifted the WolfPack to a dominant 5-0 win over the Victoria Vikes.

FOOTBALL PLAYERS OF THE WEEK

After having an opening week bye, the WolfPack opened the Canada West men’s soccer season at home and were led by forward James Fraser. The native of Penticton, B.C. scored four goals in two matches to take over the league lead in goals.

Fraser had the lone goal in a tie with the defending CW champions from UBC.  He followed that up with a hat trick against Victoria.

Fraser and the Pack hit the road this weekend, as they visit the Trinity Western Spartans and the University of Fraser Valley Cascades on September 6-7th.

Third-year forward Dominik Zuczek led the way offensively for the Dinos in their six-point weekend, sweeping Lethbridge and Saskatchewan on home turf this past weekend.

Zuczek, an engineering student, scored both goals in Calgary’s 2-0 win over Lethbridge Saturday night, then scored the game-winner just seconds after Jeff Spolnik had tied the contest in the second half against Saskatchewan Sunday.

Corbin Beauchemin scored two goals scored and a played the full 180 minutes on the hot UBCO turf this weekend, leading his Heat men’s soccer team to a pair of upset victories over two previously unbeaten squads.

On Saturday, the fourth-year scored twice against Victoria, earning player of the match and propelling the Heat to a 3-2 decision against the Vikes. Coming into the match UVic hadn't been scored on this season.

On Sunday the Heat beat the UBC Thunderbirds for the first time ever in Canada West, 2-0. Beauchemin was one of only three UBCO players on the field for the full 90 minutes.

The Heat hit the road for the first time this season, as UBCO will play Fraser Valley and Trinity Western this coming weekend.