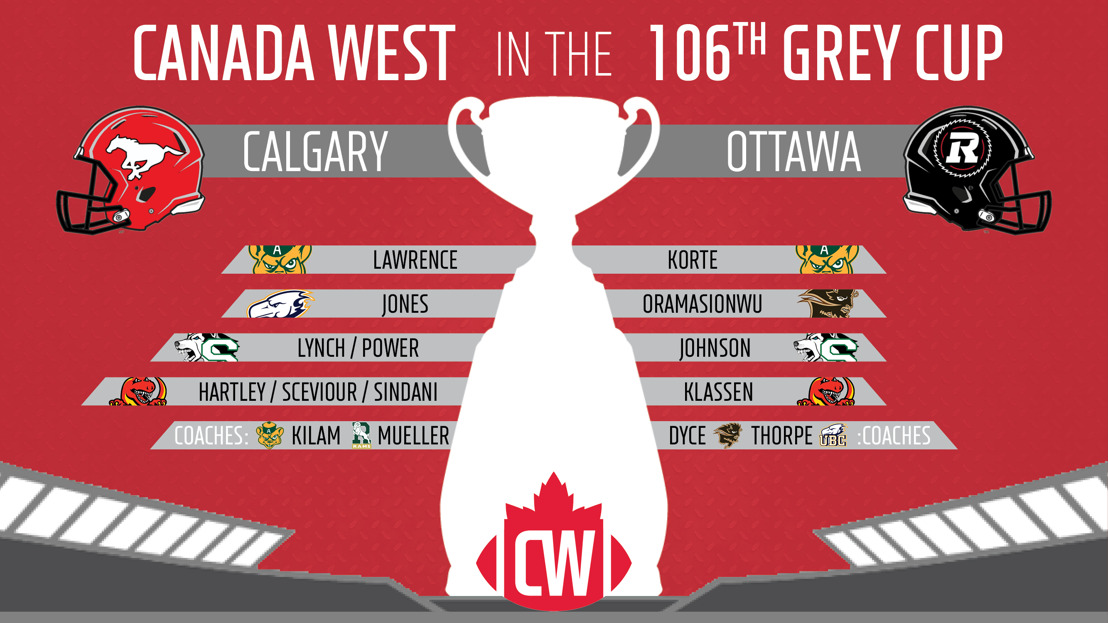 EDMONTON – From Canadian Football League commissioner Randy Ambrosie, to both the Calgary Stampeders and Ottawa REDBLACKS, Canada West's impact on the CFL will be on display this weekend in Edmonton.

Starting in the league office, where Ambrosie is in his second season at the helm, to both team's rosters and coaching staffs, former CW players and coaches are sure to leave their mark on the 106th edition of the Grey Cup, which is set for Sunday.

Ambrosie spent four years playing at the University of Manitoba (1981-1984) and was a two-time conference all-star on the offensive line before spending nearly a decade in the CFL.

For the Western Division champion Stampeders, a total of seven CW products are on their roster, including linebacker Riley Jones.

The former UBC Thunderbird has suited up in 18 games for the Stamps this season, including last week's Western Final when he recorded a pair of special team's tackles in Calgary's 22-14 win over the Winnipeg Blue Bombers.

On the other side of the Grey Cup matchup, the REDBLACKS feature four Canada West products on their roster.

All four have seen significant playing time this season, as Ottawa used a 46-27 win over the Hamilton Tiger-Cats in the Eastern Final to advance to their third Grey Cup in the last four seasons.

Among Ottawa's CW grads is offensive lineman Mark Korte. The Spruce Grove, Alta. native was taken fourth overall in the 2018 CFL Draft and is looking to hoist the Grey Cup at home after playing his university ball with the University of Alberta Golden Bears.

Along with representation on the field, both Calgary and Ottawa have a Canada West feel on their respective coaching staffs.

On the sideline for Calgary will be former Golden Bear Mark Kilam and ex-Regina Ram Marc Mueller.

A linebacker for Alberta from 1997-2001, Kilam is the Stamps special teams coordinator, and has been coaching at the CFL level for 14 seasons, while Mueller is Calgary's running backs coach. Mueller was a star quarterback at Regina (2007-12) and coached with the Rams during the 2013 season, before landing with the Stamps in 2014.

Like Calgary, Ottawa has a pair of CW coaches on their staff, as defensive coordinator Noel Thorpe is joined by special teams coordinator Bob Dyce.

Thorpe spent fives seasons with the UBC Thunderbirds during the 1990s, and was part of the team's 1997 Vanier Cup championship squad.

Dyce, a former Manitoba Bisons player and coach, has been coaching at the CFL level since 2003, and is a two-time Grey Cup champion as a coach (2013 - Saskatchewan, 2016 - Ottawa).