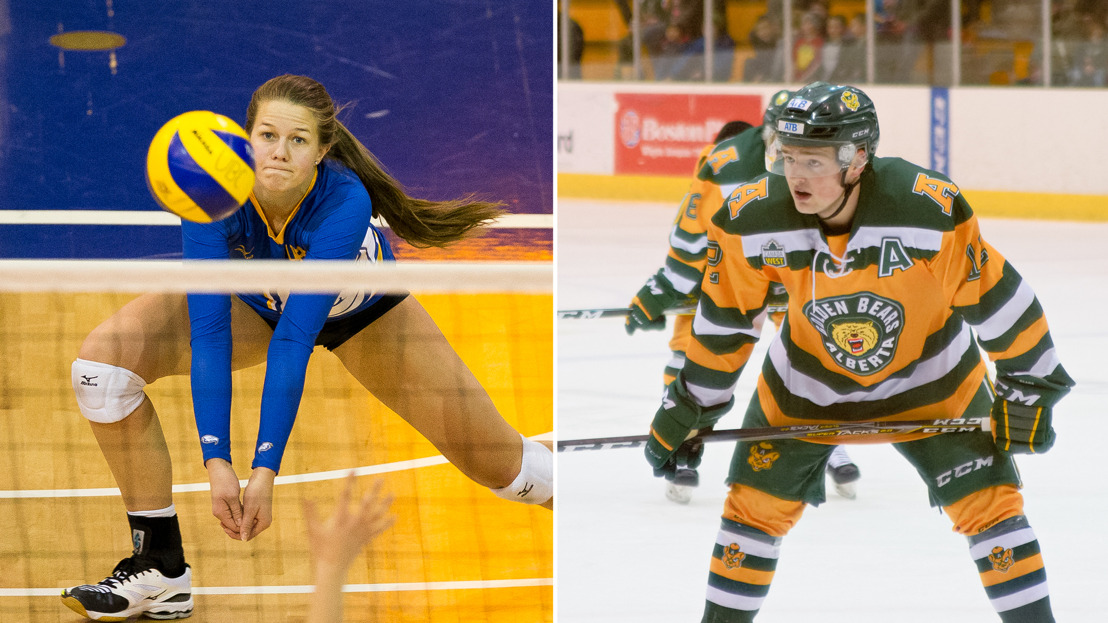 EDMONTON – Kiera Van Ryk of the UBC Thunderbirds and Luke Philp of the Alberta Golden Bears are the Canada West first stars of the week for the period ending January 26.

Van Ryk helped lead the Thunderbirds to a sweep of the previously undefeated and No. 1-ranked Trinity Western Spartans over the weekend, combining for 36 kills, seven aces, and 14 digs. The victories pushed UBC's win streak to five, as the Thunderbirds soared into fourth in the conference standings.

On the ice, Philp had an explosive offensive weekend for Alberta. The former Red Deer Rebels captain scored four goals Friday night, becoming the first Bear in more than four years to score a quartet in the same game. Philp added a pair of assists Saturday to finish with six points in Alberta's sweep of the Regina Cougars

The 2018 U SPORTS Rookie of the Year just keeps adding to her impressive numbers, as she helped lead the Thunderbirds to a weekend sweep over the No. 1-ranked Spartans in Langley over the weekend, dropping just one set in the process.

Van Ryk led all players with 17 kills Friday, and posted a match-high five service aces while being credited with 22 points, as the ‘Birds handed TWU their first loss of the season.

Saturday, the Kinesiology student put up 19 kills – more than double the next closest player. Van Ryk did so with an incredible .485 attack, while getting the job done defensively with seven digs.

The T-Birds, meanwhile, have now won five straight matches, dropping just two sets over their current streak. With a record of 13-7, UBC enters a bye week in fourth place in the conference, closing in on a playoff berth while they're also still in the hunt for home court advantage the opening round of the playoffs.

In one of the most dominant performances of the season, third-year Golden Bears forward Luke Philp powered Alberta to a series sweep over Regina with a six-point weekend.

Philp scored four goals in Friday’s 6-3 road win over Regina, before adding two assists in their 7-1 win on Saturday. The third-year Bear also added 11 shots and a +4 rating over the weekend, as the Bears earned their 8th and 9th straight wins.

Friday’s offensive explosion represented a career-high for Philp, who became the first Bear since 2014 to reach the mark. During his current seven-game point streak, the former Red Deer Rebel forward has 11 goals and 17 points.

Through 20 conference games, Philp leads Canada West with 20 goals and 37 points, and has a six-point lead in the CW scoring race. He is also the first Bear with 20 goals in conference play since Ryan Wade in 2004.

The Golden Bears will look to add to their win streak this weekend, as they host the U Cup host Lethbridge Pronghorns at Clare Drake Arena.

Reclaiming a share of the conference scoring lead, fourth-year Pandas forward Autumn MacDougall led the Pandas to a sweep of the Regina Cougars with six points this past weekend.

With her outstanding performance, the reigning scoring champion jumped back into a tie with teammate Alex Poznikoff for first this season with 12 goals and 29 points through 24 games. With a +6 rating over the two games, she also jumped atop the conference with a staggering +29 rating this season.

MacDougall drove the Pandas attack in Friday night’s 5-0 win, scoring an incredible goal early in the second, before adding two assists later in the period. She also added a game-high five shots, finishing with a +3 rating.

The fourth-year forward added another three assists in the Pandas 4-1 win on Saturday, and is now just one point back of tying her career-high of 30 points, set last season.

The first-place Pandas will return to action this weekend looking to clinch a top two seed as they visit the Lethbridge Pronghorns.

It was another stellar weekend for the defending Canada West Rookie of the Year, as Grant Shephard helped lead the Thunderbirds to another weekend sweep, this time over the visiting UNBC Timberwolves.

Friday night saw the second-year forward put up 18 points and a team-high nine rebounds in just 25 minutes of action, as Shephard went 7-of-9 from the field. The following night, the Kelowna, B.C. native led all players on the court in both points (24) and rebounds (13) while shooting 10-of-11.

Heading into the final weekend of the regular season, Shephard is third in Canada West offensive rebounds (63), fourth in total boards (163), fourth in blocks (21), and leads the conference with an amazing 67.0 field goal percentage.

The T-Birds have now won 16 straight and sit behind only the undefeated Calgary Dinos for first in the conference. UBC heads to Edmonton this weekend to take on the Alberta Golden Bears, as the ‘Birds aim to lock down a first round playoff bye.

Fourth-year forward Katie Langdon led the way this past weekend for the Victoria VIkes in their sweep of the UBC Okanagan Heat. Langdon was the leading scorer both nights, as the Vikes improved to 10-8 on the season.

On Friday, Langdon was the beneficiary of quality team play and logged 18 points and seven rebounds in an 81-64 win over the Heat. A day later, the Vikes put away the Heat 97-62 on the road thanks to Langdon’s double-double performance of 23 points and 14 rebounds.

With the wins the Vikes took one step closer to ensuring a top eight playoff seed, and a first-round home playoff game.

The WolfPack snapped a six-match losing streak this weekend with a sweep of the Manitoba Bisons on the frigid Prairies.  Despite the cold temperatures in the Manitoba capital, someone who wasn’t cold was WolfPack fifth-year outside hitter Tim Dobbert.

The German national moved into the Canada West lead with 283 kills this season, thanks to his 46 kills over eight sets against the Bisons.  Dobbert also sits second in CW in kills per set (4.56).

Off the court, Dobbert is en route to being named a U SPORTS Academic All-Canadian in his Masters of Business program for a second consecutive season.

He and the WolfPack will have another tough test as they open up a four-match home stand this Friday with two matches at the Tournament Capital Centre against the top team in the nation, the Brandon University Bobcats.