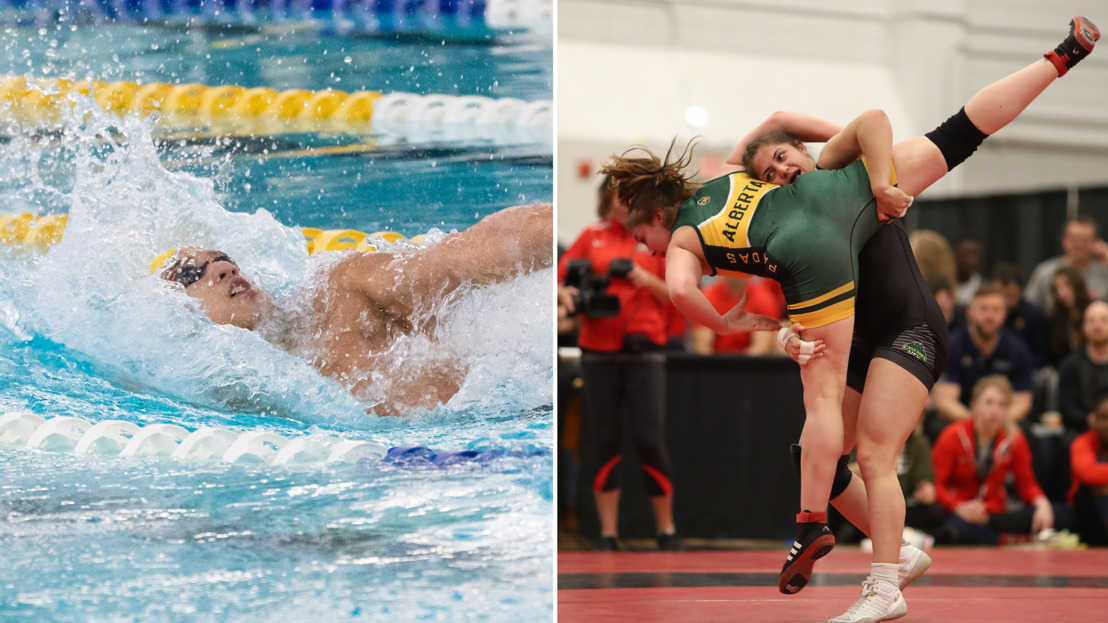 EDMONTON – Swimmer Markus Thormeyer and wrestler Ana Godinez Gonzalez are the Canada West first stars of the week after dominating at U SPORTS championships this past weekend.

In wrestling, Godinez Gonzalez was dominant in the women's 63 kg division, recording a perfect 4-0 record, while having zero points scored against her. As a result of her stellar performance, she became the first UFV athlete to earn a national athlete of the year, as she was named the U SPORTS Wrestling Female Athlete of the Year.

Both will now move forward as the CW nominees for the U SPORTS athlete of the week awards.

With an incredible haul of seven gold medals, third-year UBC swimmer Markus Thormeyer was named U SPORTS Male Swimmer of the Year while helping the Thunderbirds to a fourth banner in the last five years.

All four of Thormeyer’s individual gold medals featured new U SPORTS record times as did all three of his relay races.

The Science student from Delta, B.C. earned his first gold of the meet with a record time of 53.78 in the 100m backstroke. Thormeyer capped off a solid first day of the championship racing the anchor leg of UBC’s gold medal 4x100m medley relay.

Saturday saw Thormeyer atop the podium two more times, first with a gold in the 200m freestyle in a U SPORTS record time of 1:48.02. He then swam another stellar anchor leg in the 4x200m freestyle relay team.

The final day of the meet saw Thormeyer claim two more individual golds in the 100m freestyle and the 200m backstroke, along with his third relay gold in the 4x100m freestyle.

Ana Godinez Gonzalez turned in a historic performance on behalf of the University of the Fraser Valley Cascades at the U SPORTS Wrestling Championships in Calgary on the weekend.

The sophomore out of Surrey, B.C. laid waste to the competition in the women’s 63 kg weight class, winning all four of her matches via tech fall on her way to the gold medal. She did not surrender a single point against, out-scoring her opponents by an aggregate total of 42-0 as she earned her first national crown.

Godinez Gonzalez’s dominance was recognized at the All-Canadian awards banquet, as she was named the U SPORTS Wrestling Female Athlete of the Year. She becomes the first Cascades athlete across all sports – male or female – to win a U SPORTS athlete of the year award.

Cole earned three gold medals at the conference championship in Edmonton, setting a new record in the 300m dash, while also earning the Male Performance of the Meet, and the Male Track Athlete of the Year.

After setting a new U SPORTS record in Windsor last March, Cole added his name to the CW record book on Friday. His 300m time of 33.44 broke the oldest standing Canada West record, which was previously set by Canadian Olympian Cyprian Enweani at the 1985 Canada West Championships.

The Sherwood Park native is the No. 1-ranked 300m sprinter in Canada, and will look to add more hardware to his trophy case in two weeks at the U SPORTS Championship in Winnipeg.

It was a coming out party for second-year Thunderbird Emily Overholt who won four individual gold medals, setting a new U SPORTS record in each, and three silver relay medals. In total, Overholt accumulated 128 points for UBC, more than any other female swimmer at the meet, to help the Thunderbirds clinch their seventh banner in the last eight year.

The West Vancouver native started the championship in her home pool with a bang, setting a new U SPORTS record time of 4:06.27 to win gold in the 400m free. She later swam the anchor leg of UBC’s silver medal winning 4x100m medley relay.

Saturday saw Overholt capture two more gold medals with new U SPORTS record times in the 200m free as well as the 400m individual medley. She capped off the evening with another silver in the 4x200m freestyle relay.

Overholt earned her fourth gold of the meet with a record time in the 800m freestyle of 8:46.89 and just half an hour later swam anchor in the silver medal winning 4x100m freestyle relay.

Brad Hildenbrandt completed his three-peat, winning a third consecutive heavyweight title at the U SPORTS Wrestling Championships in Calgary on the weekend.

The fourth-year University of the Fraser Valley wrestler continued his dominance over the heavyweight division, winning all three of his pool matches on Friday by tech fall without allowing a single point against.

Hildenbrandt faced more adversity in the final against Frederick Choquette of the Concordia Stingers. He raced out to a 7-0 lead, only to watch Choquette battle back to cut the deficit to 7-6 in the dying seconds of the second round. The reigning Canada West men’s wrestler of the year hung on for the victory, though, to climb to the top step of the podium once again.

This weekend was the feather in the cap of an outstanding campaign, as third-year swimmer Kelsey Wog finished the 2018-19 season with her best performance yet at nationals.

The Winnipeg native’s time in the 200-metre breaststroke also broke a four-year-old U SPORTS record by over two seconds, as she posted a 2:25.50 and won the event by seven seconds over the nearest competitor.

The performance at nationals completed a season that also saw Wog win four gold medals at the 2018 Canada West Swimming Championships — all three breaststroke events and the 200-metre freestyle.