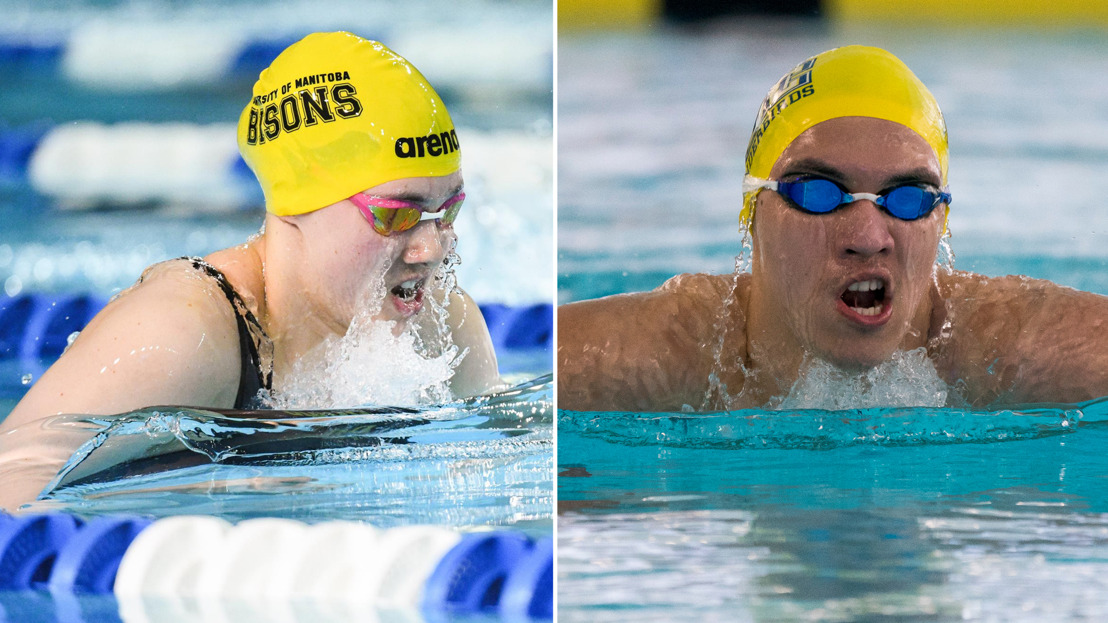 EDMONTON – Canada West swimmers Kelsey Wog and Markus Thormeyer are the conference's first stars of the week for the period ending November 25, 2018.

Wog continued her dominant Canada West swimming career, as she earned four gold medals over the weekend at the conference championships, including a record-setting performance in the 200-metre breaststroke (2:22.28).

Meanwhile, Thormeyer earned six total medals (five gold and one bronze), including a new conference record in the 50-metre backstroke, as the 2016 Olympian finished the race in 24.45.

At the 2018 Canada West Swimming Championships this weekend in Calgary, Bison third-year Kelsey Wog continued to show why she’s one of the best varsity swimmers in the country.

Wog walked away from the weekend with four gold medals, winning the 50-metre, 100-metre, and 200-metre breaststroke, along with the 200-metre freestyle.

For her performance, Wog was named the CW Female Swimmer of the Meet for the second straight year.

The Agricultural and Food Sciences student is coming off a successful summer, in which she qualified for the Pan Pacific Championships in Tokyo at the Canadian Swim Trials.

Third-year swimmer Markus Thormeyer from Delta, B.C. was dominant in the pool this weekend, helping the UBC Thunderbirds men’s team to a sixth straight Canada West title while also being named the CW Male Swimmer of the Meet at the conference championship in Calgary.

In addition to his five gold medals, Thormeyer earned a bronze in the 50-metre butterfly.

With a total of six medals, five of them gold, in Calgary over the weekend, Hoi Lam Karen Tam played a massive role in the Thunderbirds capturing their remarkable 10th consecutive Canada West women’s banner.

The third-year international student from Hong Kong also set two new Canada West records. Tam’s gold medal performance in the 50-metre freestyle set a new conference mark in 25.12. She followed that up with a record time of 54.44 in Sunday’s 100-metre freestyle.

In addition to Tam’s five gold medals, she earned a silver in the 100-metre butterfly that saw the gold medal winner set a new conference record.

Tam and the Thunderbirds easily won their record 29th Canada West title by 274 points over the host Calgary Dinos.

In an authoritative series sweep over the No. 6-ranked Calgary Dinos, Luke Philp led the No. 3-ranked Alberta Golden Bears to a pair of decisive wins this past weekend.

Philp finished the weekend with six points, including a five-point outburst in Alberta's 8-0 win on Saturday in Calgary. The Bears outscored Calgary 14-2 in two games, leapfrogging their provincial rivals to move into second in Canada West.

The third-year Bears forward recorded one assist on Friday in their 6-2 win, before recording his first hat trick of the season on Saturday, while also adding a pair of assists. Despite missing four games with injury this season, Philp now leads Canada West with 17 points in 10 conference games.

The third-ranked Golden Bears will face another stiff test this weekend, as they travel to Saskatoon to take on the conference-leading, and No. 2-ranked Saskatchewan Huskies.

Taylor Claggett was an unstoppable force for the University of the Fraser Valley women’s basketball team as they earned a stunning sweep of the previously undefeated, Canada West-leading, U SPORTS No. 10-ranked UNBC Timberwolves.

The fourth-year forward from Mission, B.C. stared down Canada West scoring leaders Maria Mongomo and Vasiliki Louka and more than held her own, pouring in game-high point totals both nights. On Friday, Claggett racked up 28 points and stuffed the stat sheet with six rebounds, four assists and two steals in the Cascades’ 72-66 win. On Saturday, she had a huge double-double (25 points, 11 boards) and added three assists and two blocks in a 74-71 triumph.

Claggett’s outburst moved her into the top five in Canada West scoring at 19.3 points per game, and she’s also 12th in the conference in rebounding (8.3 per game) and tied for 18th in assists (2.9 per game).

The two victories allowed the Cascades women’s hoopsters to level their record at 5-5. They wrap up their first semester schedule this weekend as they face the UBC Okanagan Heat on the road.

Stephen Calkins had the best medal haul for the University of Calgary Dinos, as they hosted the 2018 Canada West Championships.

The Calgary native won seven medals on the weekend, including a pair of gold medals and four podium finishes in individual events.

On Friday, Calkins won two silver medals in the 50-metre butterfly and the 4x200-metre freestyle relay.

On the final day of the competition, the second-year swimmer won two more gold medals, with a time of 48.47 in the 100-metre freestyle and as the third swimmer in the 4x100 medley relay.

With a sweep of the sprint freestyle events, Calkins was the second-ranked male swimmer by FINA points at the Canada West Championship and his 100-metre freestyle swim was the second-best swim of the meet.

Calkins and the Dinos will now set their sights on the U SPORTS National Championships, taking place in Vancouver in February.