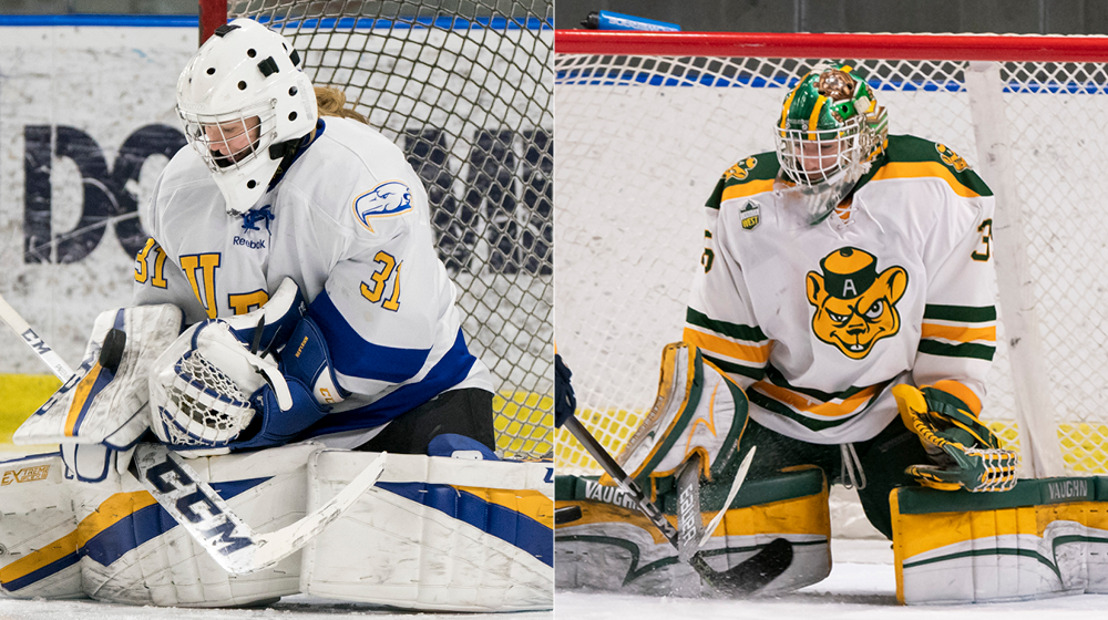 Sawchenko helped the Golden Bears extend their winning streak to five games, making a combined 43 saves on the weekend. A night after holding on for a 3-2 double overtime win, Sawchenko was unbeatable on Saturday stopping all 17 UBC shots to post his third shutout of the season, while improving his conference best goals against average to 1.71.

In Edmonton, Micklash made 27 saves for the shutout on Friday night, as the T-Birds upset the No. 2-ranked Alberta Pandas 2-0 despite being outshot 27-12 in the game. On Saturday, Micklash made another 27 saves and allowed just one goal to help UBC earn an all important point on the road in a 2-1 shootout loss.

Putting forth one of his best weekends of the season, second-year Golden Bears goalie Zach Sawchenko led Alberta to a series sweep over UBC in Vancouver.

Sawchenko allowed just two goals over 129 minutes, as the Golden Bears were able to extend their winning streak to five thanks to a pair of wins over the Thunderbirds.

The Calgary, Alta. product made 26 saves on 28 shots on Friday night, as the Bears escaped with a thrilling 3-2 double overtime win. Sawchenko then added 17 saves on Saturday, earning his third shutout of the season. The win was also his fourth-straight, a streak dating back to December.

In 15 games this season, the sophomore Bear leads Canada West with a 1.71 goals against average, while sitting second in wins (12) and shutouts (3), and third in save percentage (.916).

The 16-3-1 Golden Bears will look to add to their winning streak this weekend, as they take on 11-5-4 Mount Royal Cougars in a home-and-home series.

The unranked UBC Thunderbirds went into Clare Drake Arena over the weekend and came away with four out of a possible six points against the No. 2 Pandas, thanks in large part to third-year goaltender Tory Micklash who allowed just one regulation goal on 55 shots.

The Kinesiology student stopped 27 shots Friday night for her fourth shutout of the season,  and made another 27 saves Saturday for a .982 save percentage on the weekend.

Micklash has an outstanding 0.88 goals against average and a .958 save percentage on the season and has not allowed a goal against in four of her nine wins.

The T-Birds currently sit third in Canada West, five points back of second-place Manitoba and seven behind the Pandas. UBC is on the road again this weekend, visiting the Dinos in Calgary.

Back-to-back double-doubles are an impressive accomplishment for any player, but even more so when you’re posting double-digit points and rebounds as a six-foot point guard. That’s precisely the feat that Vick Toor authored in leading the University of the Fraser Valley men’s basketball team to a weekend split in a pair of tough road games at UVic.

Toor, a sophomore from Kent, Wash., racked up season highs for points (21) and rebounds (14) on Friday along with five assists, sparking the Cascades to a 98-94 triumph over the Vikes. He also sparkled in Saturday’s rematch, posting 17 points and 11 boards, but UVic managed a 78-75 victory to snap UFV’s 10-game win streak.

Toor and the Cascades (11-5) are on a bye week before returning to action Jan. 25-26 against the reigning U SPORTS national champion Calgary Dinos.

The Thompson Rivers University WolfPack have kicked off the second half their Canada West women’s volleyball season with the intention of making it to the post-season.  Despite a number of injuries to key personnel, rookie outside hitter Olga Savenchuk has been a mainstay for the Pack.

The native of Donetsk, Ukraine has been an offensive power all season and this weekend was no different.  In back-to-back come-from-behind five-set wins at home over Mount Royal, Savenchuk was the key offensive cog for TRU.  She had a combined 37 kills in the 10 sets.

She and her teammates are now .500 (8-8) and have a very tough weekend ahead, as they visit the first-place Trinity Western University Spartans at the Langley Events Centre.

Seth Friesen has been a big part of the Bobcats’ successful season and this past weekend in Edmonton was just another example of his outstanding play. The fourth-year left-side had a season-high 20 kills as the No. 1-ranked Bobcats traded blows with fellow Canada West heavyweight Alberta Golden Bears before Brandon picked up the straight sets win. Friesen also finished the contest just one dig shy of a double-double at nine.

Saturday saw the Bobcats drop their first set in 10 matches, but it was the only setback the team faced all weekend, as the Bobcats improved their conference record to 14-2.

Friesen and the Bobcats remain ranked No. 1 in the country as the team does not see action this coming weekend before resuming conference play with a home-and-home series with Winnipeg on Jan. 24.

Fifth-year guard Amira Giannattasio once again was the main source of offence for the University of Victoria Vikes women’s basketball team this weekend in a pair of games against the Fraser Valley Cascades.

Giannattasio shot 100 per cent from the free throw line, going 16-for-16 over the weekend including 10 in the Vikes' Friday night victory over the Cascades. The Hamilton, Ont. native led Victoria in scoring in their Jan.11 victory, posting 20 points, six rebounds and two assists in 25 minutes of game time.

Amira followed up that performance on Jan.12 with 28 points, four rebounds, three assists, one steal and never stepped foot off the court playing all 40 minutes of the game. The 28-point game for the social sciences student means she now is the fourth highest scoring Vike in school history. The Vikes narrowly lost to the Cascades 73-71, but it was Giannattasio keeping her team within striking distance all night long.

Amira has been instrumental in her teams climb up the Canada West standings, as they currently sit fifth in conference RPI.