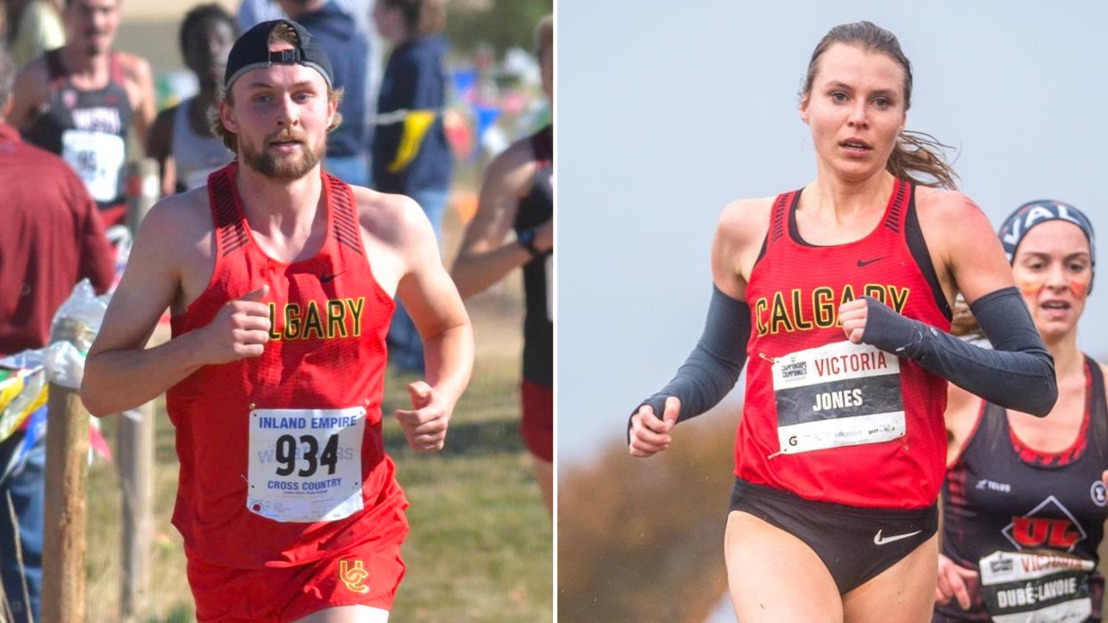 Pennock was the top Canada West runner at the event, finishing third overall in the men's race with a time of 31:16.2 (10 km). The fourth-year Kinesiology student helped guide the Dinos to their first national title in program history.

On the women's side, Jones was the top CW finisher, completing her eight-kilometre race in a time of 28:28.7. Jones' time was good for fifth overall.

Meet log: Saturday, Nov. 10 – Top CW finisher (3rd overall) with a time of 31:16.2 at the U SPORTS Cross Country Championships in Kingston, Ont.

The University of Calgary Dinos captured their first national title in men’s cross country this past weekend in Kingston, Ont.

It was a balanced attack for the Dinos as they finished with three All-Canadians, but the standout performance came from Russell Pennock, who finished third overall with a time of 31:16.2.

Pennock was the top Canada West runner at the national championship, adding to what has been an incredible season for him. During three races with the Dinos leading up to last weekend, Pennock was the top finisher in all of them.

The fourth-year kinesiology student is the CW Cross Country Athlete of the Year for the second year in a row in addition to earning First Team All-Canadian and Canada West all-star honours.

Meet log: Saturday, Nov. 10 – Top CW finisher (5th overall) with a time of 28:28.7 at the U SPORTS Cross Country Championships in Kingston, Ont.

Melissa Jones was the top Canada West finisher at the U SPORTS Women’s Cross Country Championship in Kingston, Ontario over the weekend.

The Pembroke, Ont. native finished with a time of 28:28.7, which was good enough for fifth overall.

Jones earned First-Team All-Canadian and Canada West All-Star recognition for her performance and was named the conference’s athlete of the year in cross country.

With Jones’ help, the Dinos finished eighth overall at the national championships, including third among Canada West teams.

Meet log: Saturday, Nov. 10 – Second among CW runners (4th overall) with a time of 31:17.0 at the U SPORTS Cross Country Championships in Kingston, Ont.

Competing in his final race as a UBC Thunderbird, fifth-year Arts student John Gay crossed the 10-kilometre course finish line in a time of 31:17, fourth overall in the field of 160 competitors. Gay’s time was the second best among Canada West runners, just eight tenths of a second behind the top CW entry.

Decorated in both track and field and cross country, Gay won UBC’s top male athlete of the year award for the 2017-18 season.

Back at number one in the nation and still winning games, Bison women’s hockey extended their win streak to six this weekend. Hosting Lethbridge at Wayne Fleming Arena, fourth-year forward Jordyn Zacharias had a massive weekend to lead the Herd.

On Saturday, the Arts major scored again, this one coming on a gorgeous break in the third period. Taking the puck at centre ice, Zacharias got a full head of speed into the zone, deking a defender and roofing the puck backhanded on Pronghorns goalie Jessica Lohues.

Zacharias, who had been relatively quiet through four weeks after leading the Bisons in scoring in 2017-18 (21 points) now has six points on the season (five goals, one assist). She leads Manitoba with 31 shots.

The Bisons travel to UBC this weekend to take on the Thunderbirds Friday and Saturday in Vancouver.

After missing more than a month due to injury, third-year forward Torrin White made an immediate impact in his return, leading the Lethbridge Pronghorn men’s hockey team to a weekend sweep of the Manitoba Bisons.

Putting an end to a four-game losing streak Friday night, the Medicine Hat product paced the Pronghorns with a goal and an assist in the team’s 4-1 win over the visiting Manitoba Bisons. White also led all Pronghorn skaters with five shots on goal.

The next night, White recorded his first multi-goal game as a Pronghorn, scoring twice, both of which were in the final five minutes of the game to seal the Pronghorns 6-3 win over the Bisons.

In four games this season, the management/education student has three goals and one assist.

Next up for White and the Pronghorns is a home date with the defending U SPORTS champion Alberta Golden Bears.

Trinity Western forward Kathryn Harvey had two goals and an assist at the U SPORTS championships to lead the Spartans to a silver medal finish.

In Thursday’s quarter-final, the third-year Human Kinetics student scored the game's lone goal to give the Spartans a 1-0 win over the Laval Rouge et Or.

Then on Saturday morning, the Coquitlam, B.C. native scored the game-winner in stoppage time to give the Spartans a 2-1 come-from-behind victory over the Cape Breton Capers to advance to the U SPORTS gold medal match.

In Sunday's championship match Harvey had two shots and an assist on the Spartans lone goal, as TWU fell 2-1 to the host Ottawa Gee-Gees.

The Spartans finished the season with a U SPORTS silver medal and a Canada West championship.