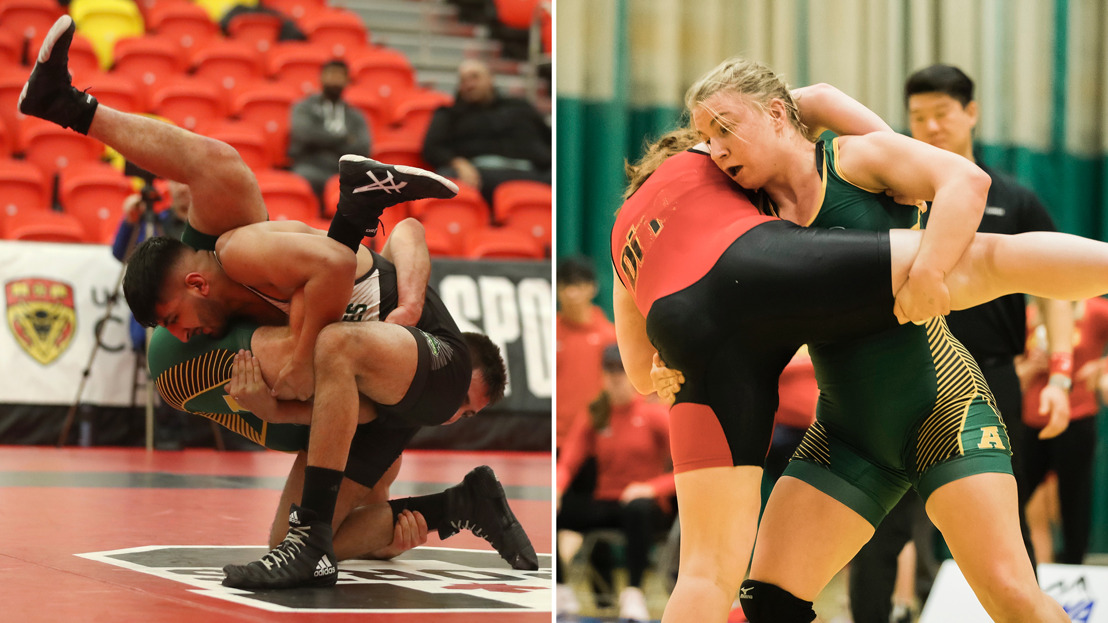 EDMONTON – The conference's top wrestlers have claimed the Canada West first stars of the week.

Atwal won the men's 76 kg division and subsequently became the second UFV Cascade in as many years to be named the event's top male wrestler, following in the footsteps of 2019 winner Brad Hildenbrandt.

Heffel earned the women's honour for her gold-medal performance in the 72 kg division. The fourth-year student dominated her two opponents, winning both matches via technical superiority.

Amarvir Atwal of the University of the Fraser Valley wrestling program had a weekend to remember at the Canada West championships in Calgary.

The sophomore from Surrey, B.C. won gold in the men’s 76 kilogram weight class, and he did so in spectacular fashion. Atwal pinned reigning CW champ Miles Kent of the Alberta Golden Bears in his final match of the round robin to secure a perfect 3-0 record, and he was subsequently voted the CW wrestling male athlete of the year. He becomes the second Cascade to win the award, following in the footsteps of last year’s winner Brad Hildenbrandt.

Atwal and the Cascades now move on to the U SPORTS wrestling championships, Feb. 21-22 in St. Catharines, Ont.

Nimo Benne may only be a rookie, but he's taken on veteran responsibilities for the TRU WolfPack volleyball team. This was evident this week as the Netherlands product was again his squad’s leading offensive weapon in their valiant effort to sneak into the Canada West men’s volleyball playoffs.

Benne was not only there to provide key points, but was also had some defensive gems as the Pack swept MacEwan to stretch their win streak to four.

Thompson Rivers closes out the regular season this coming week against the defending national champion Trinity Western Spartans at the Tournament Capital Centre.

Leading all players on the court over the course of the weekend with 51 points, Jadon Cohee closed out his regular season Thunderbird career in style, helping lead UBC to the weekend sweep over the Winnipeg Wesmen. With the wins, UBC secured third in the CW standings and a bye through to the quarter-finals.

Surprising few, Cohee was once again an offensive force, shooting 58.1 percent from the field over the two games while making good on 44 percent of his three point attempts. He was also a perfect 8-for-8 from the free throw line

Cohee finished the regular season fourth in total conference points with 381 while also leading the ‘Birds in three-point percentage.

The ‘Birds will head to Calgary for the conference quarter-finals the weekend of February 21st and 22nd.

Fourth-year Pandas Wrestler Haley Heffel turned in a dominant performance at the 2020 Canada West Wrestling Championships, earning herself the Canada West First Star of the Week.

Heffel dominated her two opponents, winning both matches via technical superiority, and was named the Canada West Most Outstanding Wrestler.

The Dapp, Alta. product has now captured a Canada West medal in each of her four seasons with the Pandas, winning gold in 2017 and 2020, while earning silver medals in 2018 and 2019.

Heffel has also earned three U SPORTS medals, and will look to add to that total in two weeks, when the Bears and Pandas head to St. Catherines, Ontario for the 2020 National Championship, hosted by the Brock Badgers.

Grace Lew had a meet to remember at her Canada West Championships debut.

The first-year University of Calgary Dinos wrestler won the gold medal at 51kg, defeating a pair of veteran opponents in her weight class.

Lew scored a pair of wins by decision, 9-7 over Taylor McPherson of the Alberta Pandas, and 8-8 against Saskatchewan Huskies senior Katie Dutchak.

Those victories not only helped the Dinos claim their 11th conference title in program history, they also saw Lew named CW Women’s Wrestling Rookie of the Year.

The Canada West champions now turn their attention to the U SPORTS Wrestling Championships in St. Catharines, Ont., Feb. 21-22.

With just six players on the roster, Maria Mongomo and the UNBC Timberwolves stretched their winning streak to eight games, thanks to a massive pair of performances from the Spanish senior.

On Friday, Mongomo had a massive all-round game against the Griffins, scoring 21 points, hauling in 14 rebounds, extending her steals lead with six thefts, and dishing out five assists.

The very next night, she somehow increased her production, going for 29 points, 13 rebounds, four assists, and three steals.

With the 29-point performance, Mongomo secured her first Canada West scoring title, while also finishing with the most steals in the conference, and the most rebounds of her career.

The Timberwolves, after a 3-9 start, and five season-ending injuries, finished the season on an 8-0 run to secure a fourth consecutive playoff berth.