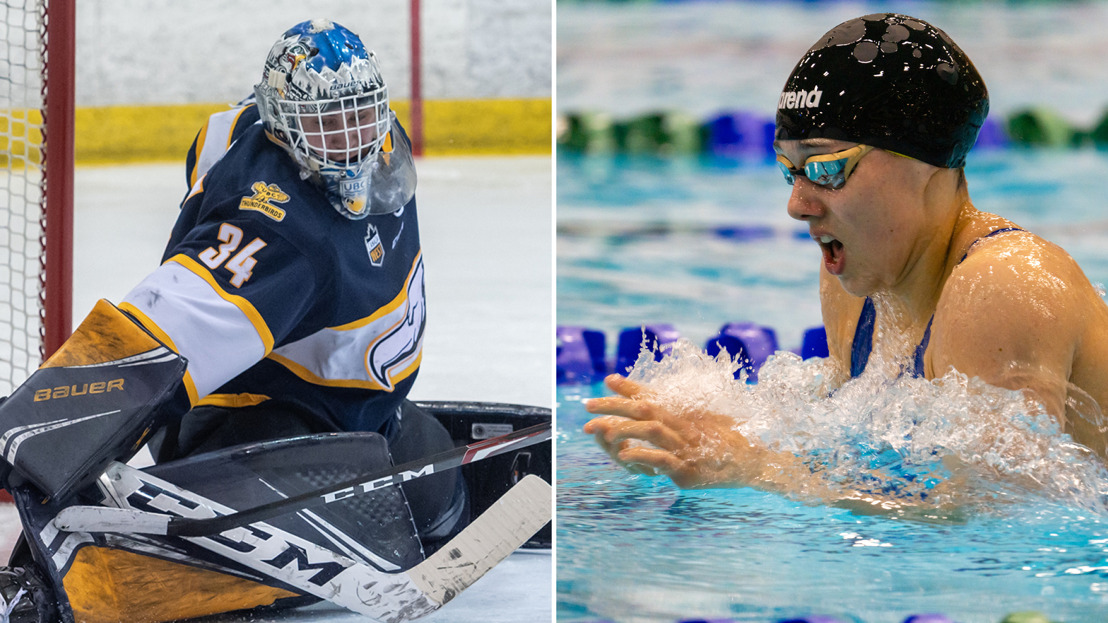 EDMONTON – On the ice and in the pool, Rylan Toth and Kelsey Wog provided clutch performances over the weekend to earn Canada West first star honours.

Toth delivered a goaltending performance for the ages Friday through Sunday in Edmonton, as the UBC Thunderbird guided his team to an upset win in the conference semifinals against the Alberta Golden Bears.

The former Seattle Thunderbird stopped a combined 91 shots in Game 1 and 3 wins for UBC, as the T-Birds became just the second No. 5 seed to advance to the CW Final in conference history. The series win punched UBC's ticket to the CW Final for the first time since 1978.

At the U SPORTS Swimming Championships in Victoria, Wog added to her remarkable university career, winning four gold medals including two in U SPORTS record times. The fourth-year swimmer was named the Female Swimmer of the Meet for a second consecutive season.

The pair will now move forward as the CW nominees for the U SPORTS Athletes of the Week.

After the Bears answered back in Game 2 to force the series the distance, Toth once again put together an all-star performance making 40 saves, 21 in the third period alone, as the T-Birds downed the No. 1 seed Golden Bears to advance to their first Canada West Final in 42 years.

The Saskatoon native will head to his home town along with the rest of the T-Birds for the Canada West Final starting Friday night against the Saskatchewan Huskies at Merlis Belsher Place.

Named U SPORTS Male Swimmer of the Year for the second consecutive time, Markus Thormeyer dominated the pool with seven gold medals, setting two U SPORTS records in the process.

Thormeyer added two more podium finishes Saturday including the 100 metre backstroke with a new U SPORTS record time of 53.51, more than two seconds faster than the silver medalist from Calgary.

His second record breaking performance of the meet came Sunday in the 200 metre backstroke with a time of 1:58.54, taking gold by more than three seconds.

Once again proving his prowess as an all-around jumper on the U SPORTS stage, Bisons fifth-year Oyinkansola (Oyinko) Akinola had an impressive weekend at the 2020 Canada West Track and Field Championships, hosted by Saskatchewan.

After medalling in two of the events at conference championships last season, Akinola earned spots on the podium in the triple jump, high jump, and long jump in 2020.

The Winnipeg native’s gold medal came in the triple jump, when he set his season’s best mark and a U SPORTS auto qualifier of 14.73 metres.

Akinola also earned silver in the high jump at 2.04 metres, an event where he’s already ranked tied for second in the country. Finally, he earned a bronze in the long jump with a leap of 6.84 metres.

A major in the Faculty of Arts, Akinola will compete in the 2020 U SPORTS Track and Field Championships, hosted by Alberta and starting March 5.

Continuing to break new ground for a Manitoba Bisons female swimmer, fourth-year Kelsey Wog capped her university season with a flourish at the 2020 U SPORTS Swimming Championships, hosted by Victoria.

Wog captured four gold medals, sweeping the individual events she competed in. This included her third straight victory in the 50-metre and 200-metre breaststroke, her fourth straight win in the 100-metre breaststroke, and a massive victory in the 200-metre individual medley — where she broke a U SPORTS long course record and swam the fastest time in the world this year.

For her performance, Wog was named Female Swimmer of the Meet.

The haul brings Wog’s all-time gold medals in U SPORTS competition to 12. The Winnipeg native has also earned two bronze and two silver dating back to 2017.

Wog, a student in the Agricultural & Food Sciences faculty, swam for Canada at the 2019 FINA World Championships in the summer of 2019 and competes with the Cali Condors in the International Swimming League.

Michelle Harrison of the University of Saskatchewan Huskies track & field program had a weekend to remember at the Canada West championships in Saskatoon, leading her team to a third-straight conference title.

In her fifth and final year of eligibility, the Arts & Science student from Saskatoon finished her Canada West career on top, picking up a gold medal in all three events she competed in and breaking two conference records in the process.

Starting off with the 60-metre hurdles Harrison crossed the line in a time of 8.21 seconds, breaking the previous conference mark that was set by Olympian Jessica Zelinka.

In the 60-metre race Harrison pulled off one of the upsets of the meet, knocking off defending conference champion Sandra Latrace to claim her second gold medal of the competition.

Wrapping up her meet with the 4x200-metre relay, Harrison once again claimed gold, leading the Huskies to a new conference record time of 1:38.01.

At the conclusion of the meet Harrison won a pair of conference awards. Her record-setting performance in the 60-metre hurdles saw her earn Outstanding Performance of the Meet honours while she also won Track Athlete of the Year accolades.

Harrison and the Huskies now move on to the U SPORTS championships, March 5-7 in Edmonton, Alta.

The Mount Royal Cougars won the battle of Calgary in the Canada West semifinals with Game 3 being a thriller in double overtime. The No. 4 seed Cougars have now earned a spot in the Canada West Final as well as the U SPORTS national championship. Fourth-year sniper Tianna Ko was involved in every one of the team's goals this weekend.

The Dinos may have taken Game 1 of the series, but they couldn't keep Ko off the board. She potted two goals, the first of which she brought out from behind the net with only one glove on and tucked the puck five hole to open the scoring.

On Saturday, Ko was relentless in the offensive zone. Her first goal on this night was an absolute rocket right off the draw that went top corner. She would end up scoring the game-winner with 32 seconds left in the third period.

It took 74 minutes for a goal to be scored Sunday and you better believe Ko was involved. In the second overtime period she received a centering pass from Breanne Trotter and fired, forcing a rebound. Trotter would end up finishing the play after a scramble in front, sending the Cougars to the next round.

The Cougars head to Edmonton this weekend to take on the No. 1 seed Alberta Pandas in the Canada West Final. Catch Game 1 at 7:00 PM MST on Friday, February 28th on Canada West TV Presented by Co-op.