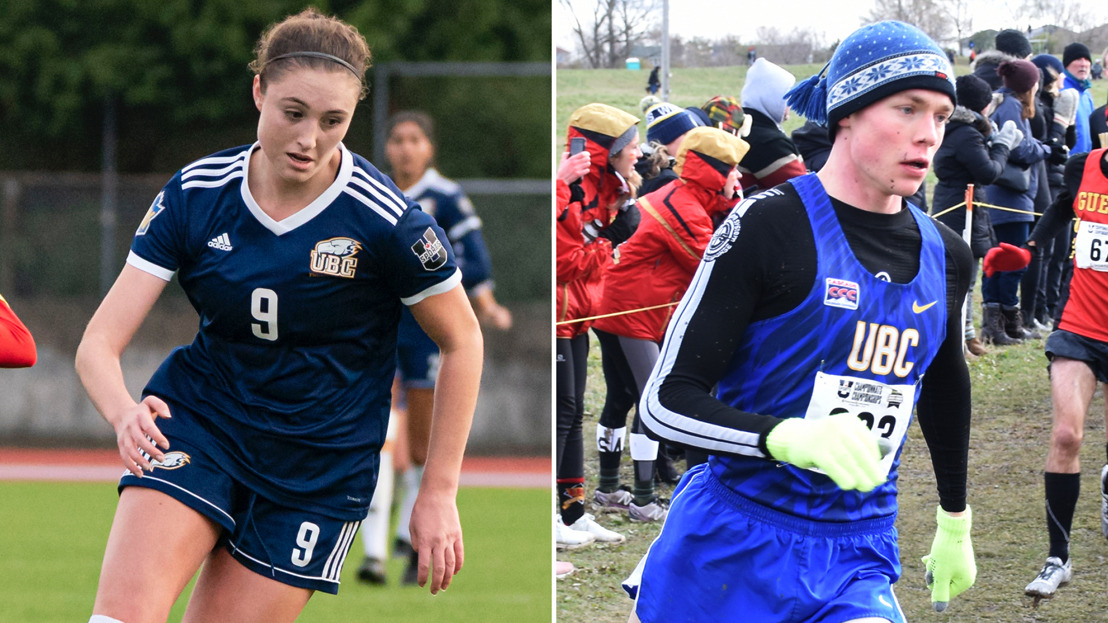 EDMONTON - A pair of UBC Thunderbirds are this week's Canada West First Stars.

Steer came up clutch at the U SPORTS Women's Soccer Championship in Victoria over the weekend, netting the game-winning goal in a pair of 1-0 UBC wins in the semis and final.

The pair will now move forward as the CW nominees for the U SPORTS Athlete of the Week awards.

With three consecutive 1-0 victories to clinch the banner, Steer’s two game-winning goals stood even bigger as the Surrey, B.C. product was named a tournament All-Star as well as the national championship Most Valuable Player.

Not only did Steer score the only goal of both the T-Birds’ final two matches, she did so in incredibly timely fashion, both coming with less than 14 minutes remaining in regulation time.

Jane Kish moved into the University of Regina’s women’s hockey record books in style, picking up the 9th and 10th shutouts of her career to move her into sole possession on the most in Cougar history.

Kish was perfect on the weekend, making 24 saves in a 1-0 win against the Manitoba Bisons on Friday night before adding a 26-save overtime shutout in her encore performance on Saturday afternoon.

The fifth-year Weyburn product helped the Cougars to their third and fourth wins of the season and the first weekend sweep for Regina during the 2019-20 campaign.

Kish began the season tied with Jennifer Schmidt in the Cougar record books with eight career shutouts, and has now registered multiple shutouts in three of her five seasons in the green and gold.

Kish sits in second place in the conference in shutouts (2), goals-against average (0.95) and save percentage (.959) this season.

Fourth-year Pandas outside hitter Kory White continued her torrid start to the Canada West season, ripping in 48 combined kills in a road split with the Thompson Rivers WolfPack.

White was sensational on Friday night, finishing with 33 kills, 12 digs and three aces in the Pandas thrilling 3-2 win over TRU.

Her 33 kills broke her own Pandas single match record, and were the second-most in one match in Canada West history. Her 37 points were also second most ever in one match.

The Edmonton, Alta. followed that up with another 15 kills on Saturday night, as the Pandas came up short with a 3-1 loss to the ‘Pack.

The 2-4 Pandas will look to get back to .500 this weekend, as they host the 2-4 Winnipeg Wesmen at Saville Community Sports Centre.

Running in frigid conditions at the Fort Henry National Historic Site on Saturday afternoon, Lumb stuck with a large leading pack through the first three laps of the course before breaking out to what turned into an eight-second gap by the end of the race.

Lumb finished the 10-kilometre course in 30:41.8, helping lead the Thunderbirds to a sixth-place team finish, improving on UBC’s seventh-place showing in 2018.

The Vancouver native’s championship run earned him automatic first team All-Canadian status while also being named the U SPORTS men’s cross country Athlete of the Year.

Carter Millar had back-to-back double doubles against Mount Royal on the weekend, helping the U of R Cougars to a weekend split.

The third-year forward posted a monster line on Thursday afternoon with a 26 point, 17 rebound effort as the Cougars lost a close one to hometown MRU. Millar went 9-21 from the floor with two three pointers on Thursday, and also snatched nine offensive rebounds.

The Regina product was in fine form again on Friday, scoring 17 points and grabbing 11 boards in just 20 minutes of action. Millar shot an efficient 7-12 from the field and was perfect on three attempts from the free throw stripe.

Millar has posted double doubles in three of the Cougars’ four games this season, and is currently averaging 18.5 points and 11.5 rebounds per game.

The Cougars are back at home this weekend with a pair of matchups against the Winnipeg Wesmen at the CKHS.

In the Heat’s home opener, Hafith Moallin, delighted the crowd as he led his UBCO squad to a 93-91 comeback victory over TRU. The second year guard finished the game with a triple double, scoring 16 points, dishing off for 11 assists and hauling down 11 rebounds.

On Saturday, Moallin scored five points, grabbed four rebounds and he passed for four assists as the Heat fell to TRU, 85-59.

The Heat are back on the road this week when they play Friday and Saturday nights at UFV.