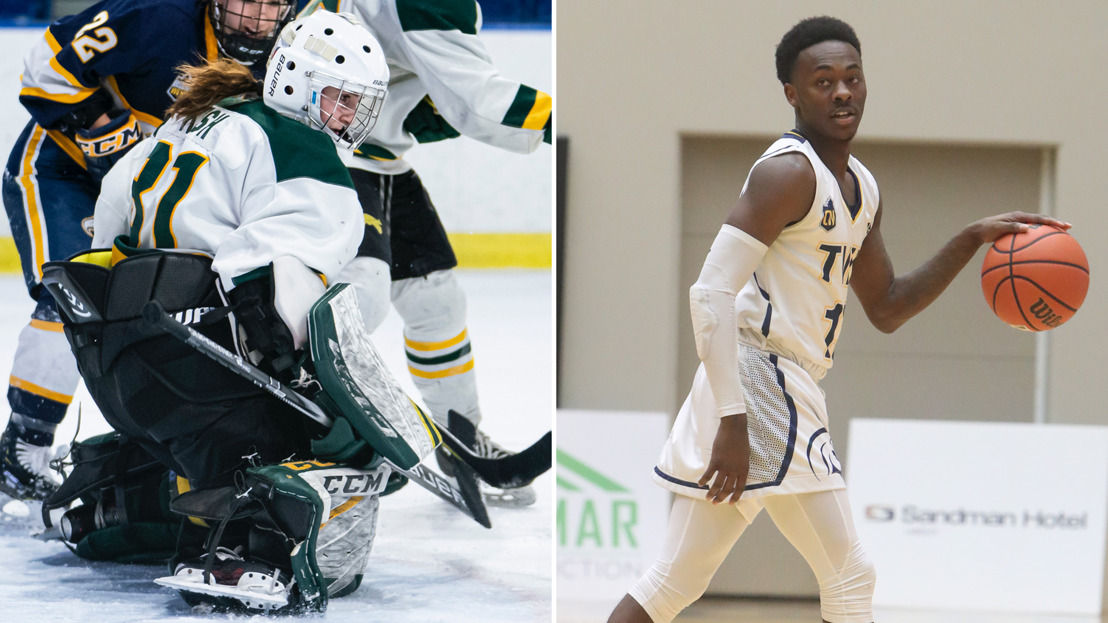 Kish was perfect in goal for the Regina Cougars this weekend in Vancouver, turning aside all 52 shots she faced, as Regina earned a road sweep of the UBC Thunderbirds.

Just down the street at War Memorial Gym, Trinity Western's Gilbreath had a weekend to remember, posting just the 16th triple-double in Canada West history on Thursday (33 points, 10 rebounds, 10 assists), before following it up with another 30-point game Saturday.

Along with Gilbreath, men's second star Matt Cooley of UFV also had a double-double, marking the first time in CW history that a pair of players had a triple-double the same weekend.

Kish and Gilbreath now move forward as the CW nominees for the U SPORTS Athlete of the Week awards, which will be announced Wednesday.

Jane Kish was perfect in net for the Regina Cougars as they registered their third and fourth consecutive road wins to start the 2020 calendar year.

Kish stood on her head with a 34-save shutout in Friday’s win, then followed that up with an 18-save blanking on Saturday that gave her a school record with her fifth shutout of the season. Kish became the U of R’s career leader in shutouts earlier this year, and is now up to 13 in her five seasons in a Cougar uniform.

Now in a playoff position after securing 11 of a possible 12 points in the last four games, the surging Cougars are back at home this weekend for two games against Mount Royal.

Taylor Claggett authored a historic weekend, posting back-to-back double-doubles and setting two significant career records as the University of the Fraser Valley women’s basketball team earned a sweep on the road vs. the UNBC Timberwolves.

On Friday, the fifth-year forward from Mission, B.C. carried the Cascades, tying a career high with 30 points and adding 15 rebounds and five assists as UFV toppled the T-Wolves 79-67. Claggett’s 11-for-12 performance from the free throw line propelled her into first place on the Canada West list for career free throws made – she ended the night with 463, surpassing the previous mark of 455 established by former Saskatchewan Huskies star Sarah Crooks.

On Saturday, Claggett once again stuffed the stat sheet, racking up 17 points and 12 rebounds as the Cascades completed the sweep with a 75-71 triumph. The performance allowed her to move to the top of UFV’s all-time scoring list with a total of 1,324 points, surpassing former Cascades great Sarah Wierks (1,321).

Claggett is second in Canada West scoring (20.1 points per game), third in rebounding (10.2) and sixth in assists (3.8). She’s the only player in the conference in the top six in all three categories – a remarkable feat.

Claggett and the Cascades (8-4) face local rival Trinity Western in a home-and-home series this week.

Rayvn Wiebe added to her outstanding season totals by leading the Bobcats to a perfect weekend over the Regina Cougars.

Wiebe and the Bobcats did not drop a single set in consecutive sweeps, which was a first for the Bobcats this season. The fourth-year outside recorded consecutive double-doubles in the process.

Wiebe demonstrated why she is one of the most versatile players in the league and showed her value to the Bobcats by registering four kills per set and 4.33 digs per set in the weekend sweep, as well as recording a team-high in aces (3) on Friday.

Ja’Qualyn Gilbreath made Canada West history this past week, recording the highest scoring triple-double in conference history and nearly recording another.

Gilbreath then followed up the record setting night with nearly a second consecutive triple-double, recording 34 points, 10 rebounds and eight assists in Saturday’s loss to the Thunderbirds. Gilbreath has now broke the 30-point mark seven times this season, and leads U SPORTS and Canada West in scoring averaging 26.3 points per game.

He and the Spartans will look to get back to their winning ways in a home-and-home against Fraser Valley Thursday (8 p.m. PT) and Saturday (7 p.m. PT).

Senior centre Matt Cooley had the performances of his life on the weekend, as the University of the Fraser Valley men’s basketball team swept the UNBC Timberwolves on the road.

On Friday, Cooley and his Cascades teammates combined for a dynamic offensive performance with rare balance – no UFV player scored more than 14 points, but six players hit double digits as the Cascades shot 54.3 per cent from the field in an 87-72 win. In the middle of it all was Cooley – a rare centre with elite passing ability – racking up 12 points, seven rebounds and five assists.

On Saturday, Cooley carved out a slice of Cascades history, posting 14 points, 13 rebounds and 10 assists in a dominant 87-58 victory, becoming the first UFV basketball player to register a triple-double. It was the 17th triple-double in the recorded history of CW men’s basketball (records date back to the 2000-01 season). Cooley’s 13 rebounds are the most ever in a CW triple-double, and at 6’9” he’s easily the tallest player to achieve the feat. Other players to do it range from 5'10" (Winnipeg's Erfan Nasajpour, Calgary's Jarred Ogungbemi-Jackson) to 6'4" (Manitoba's Paul Fust, SFU's Sean Burke).

Cooley and the Cascades (6-6) face local rival Trinity Western in a home-and-home series this week.

It was a dominant weekend on offence for the Thunderbirds who swept the two-game series over the Spartans, hitting double digits both Thursday and Saturday nights.

Grant Shephard was his usual consistent self with 22 points, co-leading the ‘Birds Thursday, on 7-of-12 shooting along with a team-high nine total rebounds.

The big third-year forward added his second double-double of the season Saturday night with 21 points and a game-high 11 boards despite playing just 18 minutes.

Shephard is third in conference shooting at 60.7 percent and leads the Thunderbirds with 7.2 rebounds per game.

UBC is fourth in the Canada West with an 11-3 record. The ‘Birds now prepare for a critical home-and-home with the 9-3 Victoria Vikes starting Thursday night in Vancouver.