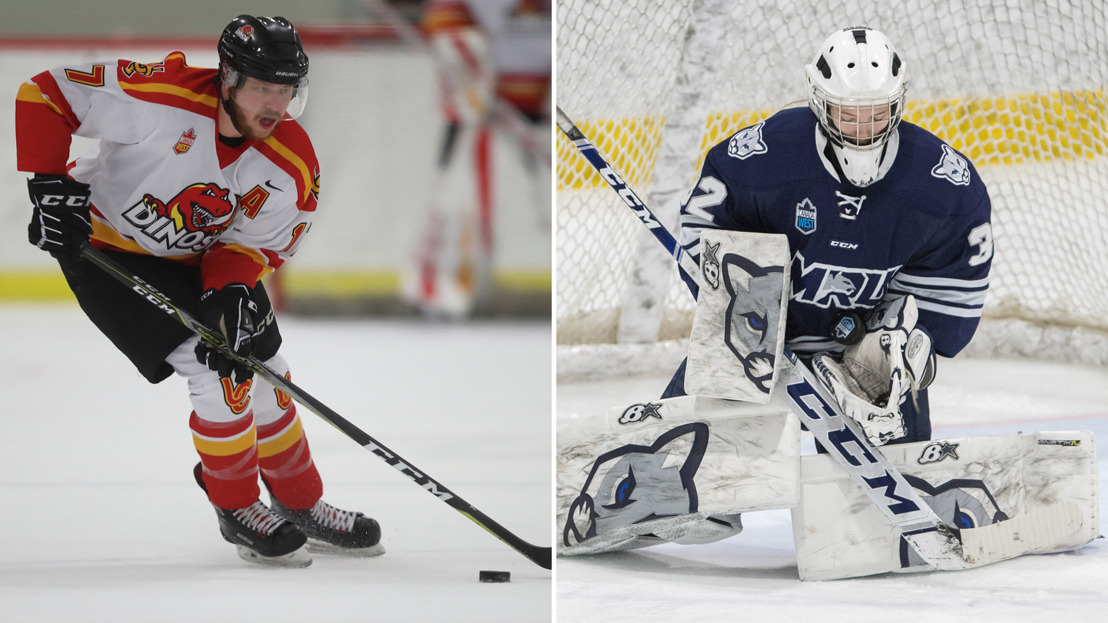 EDMONTON – A pair of standout performances on the ice in the Stampede City have landed Coda Gordon and Kaitlyn Ross Canada West's first stars for the week ending Sunday, February 16.

Gordon lifted the Calgary Dinos to a two-game sweep of the Manitoba Bisons in the CW men's hockey quarter-finals. The former Swift Current Bronco combined for two goals and three assists, as the Dinos earned a place in this weekend's semifinals against Saskatchewan.

Meanwhile across town, it was Ross who lifted the Mount Royal Cougars women's team to a sweep of Regina. Ross stopped all 46 shots fired her way, as MRU swept their way to a crosstown semifinal matchup with the Dinos beginning Friday night.

The pair now move forward as the conference nominees for the U SPORTS Athletes of the Week.

Gordon picked up five points in the Canada West quarter-final series against the Manitoba Bisons as the Dinos swept the best-of-three matchup.

On Friday night, the 2012 Calgary Flames draft pick was a highlight reel machine, registering the primary assist on three spectacular goals. Two of them established a 4-0 first-period lead for the Dinos, as they opened the series with a 6-2 win.

In Game 2, Gordon provided all the offence for the Dinos. He netted Saturday’s first goal when he picked off a breakout pass for a shorthanded tally and later scored the game-winner in the second period, batting the puck out of mid air from the corner of the crease.

With their series win, the Dinos advance to face the Saskatchewan Huskies in the conference semi-final where a berth at nationals will be on the line.

The Dinos and Huskies begin their series on Friday, Feb. 21 in Saskatoon.

Vick Toor stepped up when his team needed him the most, leading the University of the Fraser Valley men’s basketball team to a thrilling playoff victory over the Winnipeg Wesmen on Friday.

The third-year point guard from Kent, Wash. stuffed the stat sheet, racking up a game-high 19 points along with nine rebounds, four assists and three steals as the Cascades rallied from a 13-point halftime deficit to win 92-84 in overtime. Toor’s contributions were particularly critical as UFV star point guard Parm Bains exited in the fourth quarter due to injury. Toor took on the lion’s share of the ballhandling duties for the Cascades, and played a total of 39 minutes including the entirety of the fourth quarter and OT.

With the win, Toor and the Cascades advance to the Canada West quarter-finals, where they’ll take on the Calgary Dinos on Friday.

Benjafield scored the series opening goal in the first period of game one. The North Vancouver native then earned the primary assist on Colton Kehler’s game winner in the third period and also assisted on Kehler’s insurance marker later in the frame.

He scored his second goal of the series in game two early in the second period to get the ‘Birds on the board, finishing with a +1 in the 5-3 loss which forced a third and deciding game.

Unfortunately for Benjafield, he left game three in the first period due to injury, but the T-Birds were able to pick up the slack and come away with the thrilling 5-4 overtime win to advance to the semifinals.

The ‘Birds head to Edmonton to face the top-seeded Alberta Golden Bears in the best-of-three semifinal series starting Friday, February 21st with a berth in both the conference championship and the national championship tournament on the line.

Friday’s game was a stalemate for three and a half periods. Ross was a brick wall all afternoon making 22 saves and helping her team get to the second overtime period where it took only 24 seconds to seal the deal and go up 1-0 in the best-of-three series.

Saturday’s rematch was no different as the first-year netminder was perfect again, stopping all of the 24 shots she faced and clinching the first semifinal appearance for Mount Royal. That shutout brings her season total up to six and only improves upon her .943 regular season save percentage.

Ross is a first year Arts major from Redcliff, Alberta. In 13 appearances this season she has allowed more than one goal only three times and had a regular season goals against average of 1.14. The Cougars will now look ahead to an all-Calgary semifinal, as they face the Dinos to see who moves on to the Canada West Final.

Tory Micklash was a huge reason why the UBC Thunderbirds swept the host Saskatchewan Huskies in the Canada West quarter-finals over the weekend, both wins coming in overtime.

The fourth-year goaltender was strong in a T-Birds comeback victory in game one Friday night making 16 saves on 18 shots with UBC scoring the game winner in the final minute of the first overtime period.

Game two saw Micklash dominate with 38 saves to record her second career playoff shutout. The Manitoba product didn’t allow a single goal in over 83 minutes of game time Saturday as the ‘Birds finally ended the scoreless stalemate with just over six minutes remaining in double overtime.

The win advances UBC to the conference semifinals for the eighth straight season. Entering their series with the Huskies as the lowest seed, the T-Birds will aim for another upset in Edmonton as they face the top team in the regular season, the Alberta Pandas as the best-of-three semifinal begins Friday, February 21st at Clare Drake Arena.

Rookie standout Deanna Tuchscherer excelled in her first career Canada West playoff game, helping the University of the Fraser Valley women’s basketball team to a 76-54 victory over the Thompson Rivers WolfPack on Friday.

The 6’1” forward from Chilliwack, B.C. poured in a game-high 20 points with a highly efficient shooting line (8-of-13 from the field, 1-for-2 from three-point range) and added four rebounds and three assists as the Cascades pulled away in the fourth quarter.

With its 12th straight win, UFV punched its ticket to the Canada West quarter-finals. They’ll play the Alberta Pandas on Thursday in Calgary.