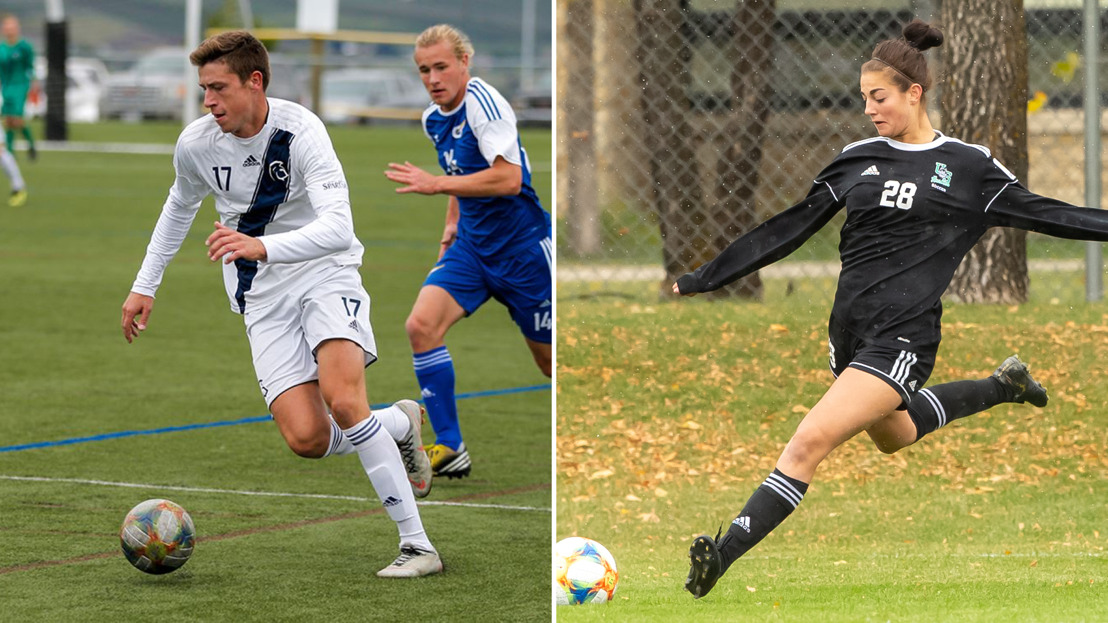 EDMONTON - Trinity Western's Cody Fransen and Saskatchewan's Payton Izsak are the Canada West First Stars of the Week after posting big weekends on the pitch.

The soccer forwards top this week's conference stars, as the stretch run to the conference soccer playoffs begins. They will move forward as the Canada West nominees for the U SPORTS Athletes of the Week.

SEPTEMBER ATHLETES OF THE MONTH

Also announced Tuesday were the CW Athletes of the Month for September, as Thompson Rivers James Fraser and Calgary's Montana Leonard take home the honours. Fraser leads CW men's soccer in scoring with eight goals, while Leonard has eight goals as well to sit atop the women's goal-scoring race.

The U SPORTS Athletes of the Month will be selected this week via a social media poll and will be announced on Friday, October 4.

Cody Fransen had a weekend to remember for the Trinity Western Spartans, playing an instrumental role in TWU’s six-point weekend.

The fifth-year forward scored a hat-trick while playing a full 90 minutes in the Spartans 3-0 win at Thompson Rivers Saturday.

Fransen followed it up with an equally important role in TWU’s 2-1 win at UBC Okanagan, assisting on Joey Seo’s opening goal while scoring the game-winner later in the 38th minute.

Fransen is already up to five conference goals this season, after scoring six last year. Fransen and the Spartans return home to Langley this weekend, taking on UNBC for a pair of games on Friday (7:15 p.m. PT) and Saturday (7:15 p.m. PT).

Matt Alfaro led the University of Calgary Dinos to a big weekend in Regina to open Canada West season.

The third-year former Lethbridge Hurricane picked up seven points in two games, as the Dinos swept the Cougars by 7-1 and 5-1 scores. He scored four goals on nine shots, all coming on special teams – three on the power play and one shorthanded – while adding three assists to take top spot in the Canada West scoring race early in the season.

Alfaro and the Dinos host UBC next weekend in their home opener.

The Mount Royal Cougars shook the Canada West men's hockey world last weekend with a sweep over the Saskatchewan Huskies in a rematch of last year's conference semis, which saw the Huskies come away victorious.

Cougars forward Keegan Iverson played a key role in the opening weekend victories. He finished with six points, four of them coming from assists on Saturday ,as the Cougars took down the huskies in a 7-2 win. On opening night Friday, Iverson netted one goal and added an assist in a nail-biting 5-4 victory.

Iverson redshirted for MRU last year when the lost all six games against SSK. The St. Louis Park, Minnesota native looks to continue his strong start this weekend, as the Cougars head south for non-conference games against NCAA opponents Minnesota State University Mankato, and Minnesota during the Canada West bye week.

Second-year forward Payton Izsak caught fire last weekend, leading the way offensively for the Huskies as they picked up one win and one tie at home.

Izsak, a member of the 2018 Canada West All-Rookie Team, scored two goals and added an assist in a dominant 6-1 victory over Winnipeg on Saturday. The kinesiology student then added an assist in a 2-2 tie with Manitoba on Sunday, earning her a career-high four points on the weekend.

Izsak, who led the Huskies in scoring last season as a rookie, has battled injuries so far in 2019, but the four points she compiled last weekend gives her the third highest total on the team.

With two points separating four teams at the top of Canada West’s Prairie division, every point counts. For the Manitoba Bisons, first-year midfielder Jessica Tsai’s performance over the weekend allowed them to get points in both matches and draw closer to their opponents in the standings.

Tsai had two clutch goals for the Bisons in a win over Regina and a draw with Saskatchewan.

On Saturday in The Queen City, Tsai put a corner kick into dangerous territory as penalty time waned in the second half. When it went into the net, it sealed a 2-1 win for Manitoba.

On Sunday in Saskatoon, Tsai scored again in the second half, this time to tie a match in the 66th minute at 2-2, helping the Bisons get a point out of the match.

Her ten points (5G-5A) in eight matches has her atop Canada West in scoring.

Manitoba is back in action this weekend when they travel to Edmonton for games against Alberta (Oct. 5) and MacEwan (Oct. 6).

Katie Lampen starred for the University of the Fraser Valley women’s soccer team on the weekend, accounting for all of the offence in a pair of 1-1 draws vs. tough divisional opponents.

On Friday, the rookie winger from Chilliwack, B.C. scored a clutch goal in the 86th minute gave the Cascades a 1-1 tie with the U SPORTS No. 8-ranked UBC Thunderbirds. On Saturday, Lampen opened the scoring vs. the Victoria Vikes in the 12th minute, volleying home Brittney Zacharuk’s cross in spectacular fashion, and she continued to generate positive offensive play throughout the contest.

Lampen’s current three-game goal-scoring streak has given her the team lead with four goals on the season, and she ranks second among CW rookies in that department.

Lampen and the Cascades (2-2-4) hit the road this week for a pair of games – Friday at the Calgary Dinos, and Sunday at the UNBC Timberwolves.