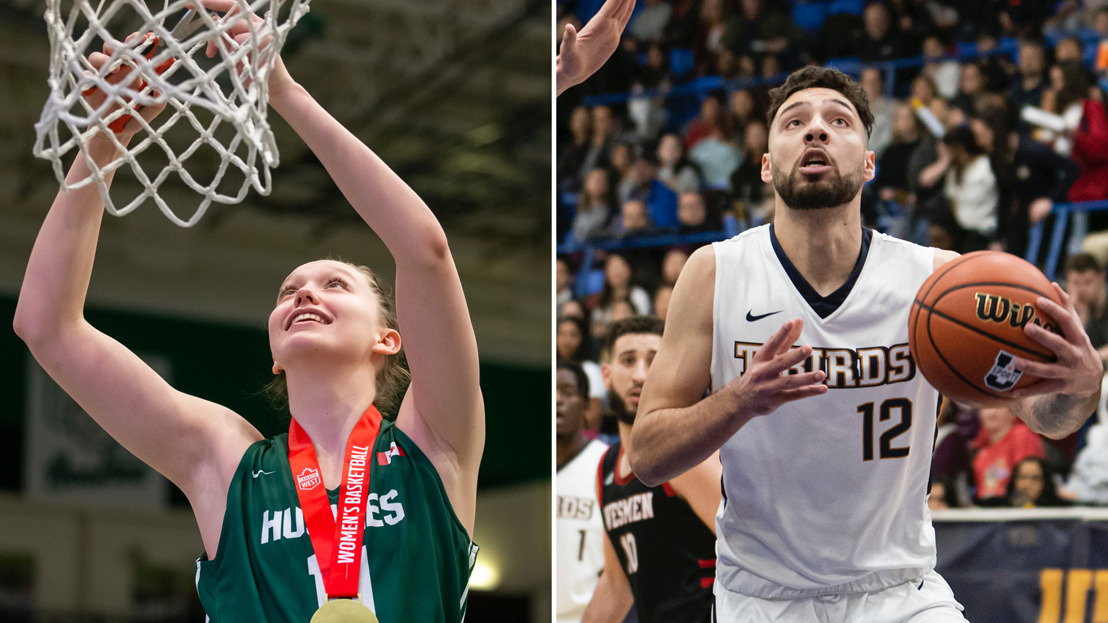 Masikewich led the Huskies to the women's conference banner in front of more than 2,500 rowdy fans in Saskatoon on Friday night, netting a double-double (17 points and 10 rebounds) in Saskatchewan's 62-51 win over Alberta.

Meanwhile in Edmonton, Cohee guided the UBC Thunderbirds to a gutsy 72-70 road win over the No. 1 seed Alberta Golden Bears, as he scored a team-high 24 points.

The pair now move forward as the CW nominees for the U SPORTS Athletes of the Week and will both be in action this week, as the U SPORTS Final 8 national tournaments are set for Ottawa.

ATHLETES OF THE MONTH

Also announced Tuesday were the Canada West Athletes of the Month for February, as Cohee and Alberta's Kirsten Chamberlin – who is this week's women's second star – were named the winners.

Cohee didn't just have a big week for UBC, he played a key role in propelling the T-Birds to their first conference title since 2013, averaging 22.8 points per game over a pair of regular season and three playoff contests.

Chamberlin, meanwhile, was nearly unbeatable in five February games. The fourth-year goalie stopped 92 of the 93 combined shots she faced, to propel the Pandas to their 14th conference title. Over four playoff games Chamberlin turned aside 78 shots in sweeps over UBC and Mount Royal.

The pair now move forward as the nominees for the U SPORTS award, which is selected via fan vote on social media.

Canada West First Team All-Star Summer Masikewich came up clutch when her team needed her the most.

Holding just a five-point lead in the latter stages of the fourth quarter and the shot clock at 1, Masikewich attempted her first three-pointer of the year, finding nothing but net and sending the Huskies to a 62-51 victory over the Alberta Pandas.

Scoring 17 points and pulling down 10 rebounds for yet another double-double, the fourth-year forward from Calgary led the way as Saskatchewan claimed their fourth conference title in the last five years.

With five of those rebounds coming on the offensive end, Masikewich was a force on both ends of the floor for a Huskies squad that will now advance to the U SPORTS Final 8 as the No. 1 seed at the national championship.

Stopping 30 of the 31 shots she faced in the Canada West Final, fourth-year Pandas goalie Kirsten Chamberlin was instrumental in leading Alberta to their record 14th Canada West Championship this past weekend.

Chamberlin turned aside 13 of the 14 shots she faced in the Pandas 5-1 Game 1 win over Mount Royal on Friday night, before recording a 17-save shutout in Game 2 to secure the conference championship for Alberta.

Through four post-season games this season, Chamberlin now has recorded three shutouts, stopping 78 of the 79 shots she has faced across two series wins.

Her 0.20 goals against average and .987 save percentage are tops in U SPORTS in the post-season. Chamberlin also now owns a 11-0-2 career Canada West playoff record, allowing just nine goals in 13 games.

Chamberlin and the Pandas will look for a record ninth National Championship next week, when they travel to Charlottetown for the 2020 U SPORTS Championship, hosted by the UPEI Panthers, March 12th to 15th.

Hilary Howe was once again all over the scoresheet in the Spartans most important weekend of the season, as the fourth-year outside helped TWU secure its first ever home Canada West Championship appearance.

After a 17-kill, two ace performance for Howe in Game 1, she totaled 11 kills while hitting .257 Friday in Game 2’s three set win to help the Spartans secure a pivotal Game 3.

She then saved her best for last in Game 3, hitting .355 with 13 kills, two aces, seven digs and four blocks as the Spartans defeated Thompson Rivers to advance to the Canada West Championship this Saturday (7 p.m. PT) and clinch a spot at nationals.

It was another monster performance for UBC’s veteran guard Jadon Cohee Saturday night in Edmonton as he led the way with 24 points while never leaving the court as the T-Birds clinched their first Canada West title since 2013, their 10th in program history.

Draining nine of a game high 19 field goal attempts including three from three-point range and going a perfect 3-for-3 from the free throw line, Cohee also put up a game high five assists against the number-one seeded Golden Bears.

Cohee finished the Canada West playoffs with the second most points (63) and second most three-pointers (8) while logging more minutes than any other player.

The T-Birds now head to the Final 8 for the second straight season where they enter as the third seed and will face the Quebec champion Bishop’s Gaiters in a quarter-final Thursday afternoon in Ottawa.

Fifth-year forward Levi Cable was determined to finish his Canada West career the way he started it, leading the Huskies to a conference title on home ice for the first time in five years.

Cable picked up three points and a pair of goals in the Canada West Final against the UBC Thunderbirds as the Huskies swept the best-of-three matchup and claimed the 11th Canada West banner in program history.

On Friday night, the former Kootenay ICE standout provided the primary helper on what would turn out to be the game-winner by throwing a no-look backhand pass perfectly onto the tape of Layne Young to secure the win.

In Game 2, Cable did everything he could to win the first banner inside Merlis Belsher Place. In what will be the home game of his Huskies’ career, the newly-named Canada West Sportsmanship and Ability Award winner scored a pair of powerplay markers to power the Huskies past the Thunderbirds.

Next up for Saskatchewan is a trip to Halifax where they will take on the best teams in the country at the U SPORTS University Cup.

It was yet another dominant weekend for Spartans fourth-year outside Eric Loeppky. The first team CW all-star once again played a pivotal role for the No. 1-ranked Spartans, helping TWU advance to the conference championship and secure a berth at nationals.

Loeppky was a difference maker in every game during TWU’s semifinal series against Brandon, averaging four kills-per set, totalling nine service aces and nine blocks. A near record-setting five ace, 14 kill performance for Eric in Game 3 capped his impressive weekend and helped TWU defeat the reigning conference champion Bobcats to advance to the conference title game this Saturday (8:30 p.m. PT) and clinch a spot at nationals.